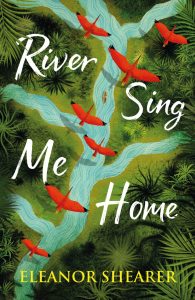 Before jumping into the review I just want to say one thing: if someone is not touched by this book, they should go immediately to the emergency room and get checked to see whether they have a heart. Anyone who can be unmoved by Rachel’s story may not actually be alive, or at least not in touch with their humanity.

Rachel is a slave on a sugar cane plantation in Barbados. Like any slave, her life has been full of struggle, of suffering, of loss. She has given birth to several children. Some were stillborn. Others died of illnesses while they were young, a common tragedy in those days for all families but particularly those kept in the squalor of the slave shacks. Several of Rachel’s children, though, did survive long enough to be taken from her by the white plantation owners. Two of her sons were sent to work on plantations in Demerara, part of Guyana. Three of her daughters were also taken and lost in the city of Providence.

“Freedom” comes to the British colonies while Rachel is still on the plantation where she has worked her entire life, mandated by the British parliament. For those who were once slaves, though, the word did not mean much. To pay off their “debts” to their masters–the costs of their purchase, feeding and housing them for years–slaves became “apprentices” for years more, still unable to leave, still with no rights, still with no freedom of movement. Rachel, though, determines that she has had enough. She runs.

Her journey begins by running away from the plantation, from slavery, from servitude, from the hopelessness and terror that filled her life. Fortunately, though, she encounters people who refocus her life. Instead of fleeing her past, she begins searching for her missing children. Her journey is marked by difficulty, by sorrow, by new friends and new enemies.

I want to be careful not to give away spoilers. This is such a compelling story, and Rachel is an amazing protagonist. She encounters many other amazing people in her journey. Leaders of free villages of black people, runaways who successfully remained hidden in the jungles of the Caribbean. Merchants making their living in the shadow of the white economy, turning the scraps they can affordinto beauty and magic and prosperity. Women who may earn their living in ways society frowns upon, but who choose their profession and choose whom they sell themselves to. They are no longer slaves, forced to bend to a master’s will. They are businesswomen, earning their way.

One of my favorite characters is named “Nobody.” Nobody is a sailor Rachel meets on her first journey away from Barbados. His story is told in the book, but what struck me so powerfully was how he embraced and redeemed his name. In a society that cared so little for him that they named him Nobody, he insisted that he was somebody. He was a man, he was free, he earned his way in the world. He could have been angry, bitter, raging at the unfairness embodied in his very name. Instead, he made sure that everybody who met him knew that there was Nobody like him.

Micah. Thomas Augustus. Mary Grace. Cherry Jane. Mercy. The children Rachel mourns for are scattered, possibly dead, probably impossible to find. But a mother’s love will not be denied, and in seeking her children, Rachel also finds herself. 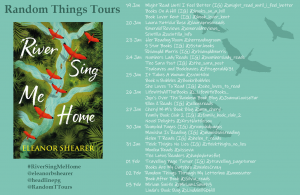 Our thanks to Anne Cater of Random Things for our copy of River Sing Me Home, given so we could provide an honest review as part of this blog tour. The opinions here are solely those of Scintilla. For other perspectives on this novel, check out the other bloggers participating in this tour.