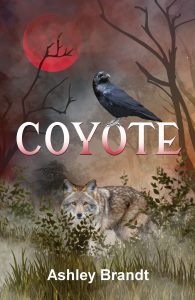 Raven Thatcher has grown up in a secret community in the Maine woods. She is a shapeshifter, able to turn from human to coyote and back again. When humans discovered that shapeshifters were in their midst, they began a war against them. Many were slaughtered. Others were captured for experimentation. Survivors fled to small enclaves far from civilization and lived their lives off the grid.

Raven has trained as a warrior, and upon turning 18 is ready to accept her first posting. However, in the span of a few hours, everything in her world changes. Her boyfriend, Jonathan, has returned from his first posting as a “feral,” no longer able to control his emotions and lusts. He has also been unfaithful to Raven. Then, her father is brutally murdered in his cabin. A member of the community’s leadership, Ramon, tells Raven that he wants to take her as his mate. And Raven is drawn to a dark stranger who saves her.

Clearly Raven has a lot to deal with, and her judgment and decisions become erratic. She is drawn to Ramon. She is drawn to the stranger who fills her thoughts. She is mourning her father. And when two of the community members go missing, she feels it is her duty to find them.

Ashley Brandt has woven a fantasy together with mythology and a bit of science fiction thrown in. Looking at it through my eyes as a father and grandfather, Raven is manipulated and deceived by many people. She is more vulnerable than she realizes and she is less independent than she should be. But good stories often rely upon bad decisions made by their characters.

It’s fun to put yourself into the story and wonder what you would have done in those circumstances, even when the fantastical circumstances could never be duplicated. Would I have been willing to deceive and manipulate someone the way men in Raven’s life did? Would I have had the boldness to go after my missing friends despite the dangers involved? Would I have been one of the sympathetic humans who supported the shifters or would I have been driven to hatred by my fear of the unknown? I know what I would like my answers to be. Good stories let us mentally practice for the unknown and the unknowable. Hopefully they also let us learn so that our choices are better than those in the story.

Our thanks to Zoe from Zooloos for our copy of Coyote, provided so we could review this novel during the blog tour. The opinions here are solely those of Scintilla. For other perspectives, check out the other bloggers on this tour.