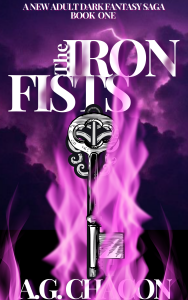 In her debut novel, A.G. Chacon creates a fantasy Mexico with multiple species coexisting, although often not coexisting particularly well. Of course, humans struggle to coexist even with other humans, so bringing other species into the mix is hardly likely to result in better behavior from our fractious race.

Iris Mahoufort barely escaped with her life when her village was destroyed by the government. Just a small child running from her wrecked and smoking house, her brother pushed her onto a train and told her to wait while he looked for their sister.

The train left with Iris on board. Her siblings were not.

Although Iris was young, she had a special gift. Her father had given her a stone which channeled her ability to manipulate water. She could stay dry in the rain, redirect a fountain to hit someone bothering her, even change the temperature of water. The stone would not work for everyone, but Iris was special.

She, however, did not feel special. She was alone in the city. She managed to survive to become a young adult, but she had no family, no friends, and no self-confidence. Furthermore, she has no idea that anyone might care about her at all until she is captured/rescued by a young man and discovers that her siblings are alive and have been searching for her.

Iris is brought into a small group of rebels called the Iron Fists. Her siblings are part of this rebel group, along with Alex and many others. They are seeking to overthrow the government that destroyed Iris’s home and killed her parents. To do so, they are seeking help from the other species in their land. Their first stop is to meet with the Shadows.

It does not go well.

A.G. Chacon is a very young author. Admittedly, some of that youth can be seen in this debut novel. It is not perfect by any means. But it is a solid start. Chacon obviously cares for her characters, especially Iris. Iris’s journey from self-loathing to the beginning of acceptance is a greater journey than her trip through the shadow lands and their obvious allusions to Dante’s Inferno (including characters named “Dante” and “Inferno”).

I certainly did not try to write a novel as an undergraduate student, and the only thing I had published was a short article in a very low circulation magazine (but my mother was very proud of me). The fact that this young woman took time during her college schedule to write and publish a book is extraordinary. To write one, despite some flaws in dialog and repetition, that is published internationally is even more so.

Overall, The Iron Fists is a solid debut from a young author with a bright future. I look forward to seeing what her future work is like. I suspect that it, like her character, will mature and grow. 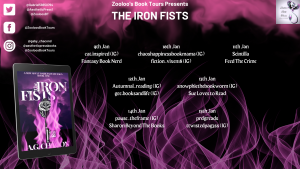 Our thanks to Zoe of Zooloos for our copy of The Iron Fists, provided so we could participate in this book tour. The opinions here are solely those of Scintilla. For other perspectives on this novel, check out the other bloggers on this tour.

One thought on “Blog Tour: The Iron Fists, A.G. Chacon”