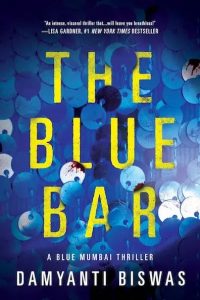 I have never had the pleasure of visiting Mumbai. In my mind, it has always been associated with very vibrant colors and smells, the colors and smells of spices, the vibrancy of traditional saris, the lights from huge skyscrapers, the salt air from the ocean. After reading The Blue Bar, I will now include the color blue in my imaginary Mumbai.

Tara was a dancer at the Blue Bar when that establishment featured provocative dancers in titillating clothes to appeal to men. During her dancing career she met a rising young police officer, Arnav. Their love affair ended abruptly when Tara disappeared. Perhaps Arnav could have found her if he had tried harder, perhaps not, but in his hurt and disappointment he did not apply all of his detective skills to the search.

Around the same time that Tara disappeared, the laws in India changed and bar dancing of the type featured at the Blue Bar was banned. Obviously people who still wanted that entertainment could find it, but it was now run solely by people who did not mind breaking the law. (That probably was not a significant change from before.)

Arnav has risen to a leading detective position. There, he is in charge of pursuing many serious crimes, but the ones that always capture his full attention are crimes against women. Arnav’s sister had been raped when he was a young teenager. The lack of interest on the part of the police and the social stigma faced by rape victims contributed to his sister taking her own life. Although he could not bring her back, he had vowed to champion the cause of other victims in her name.

When a partial body is discovered, a body missing the head, hands, and feet, Arnav is brought into the case. The coroner notes that the victim is female. He also discovers some blue sequins with the body. This reminds Arnav of another case from several years earlier, one he had not investigated but had heard of. A search turns up several other bodies; two more at the construction site where this one was found and more in the unsolved case files of the Mumbai police.

Arnav is convinced there is a serial killer. The condition of the bodies is identical, and several of them were also found with blue sequins. But there are multiple other factors at play. The construction site is owned by a wealthy businessman who is engaged to a prominent Bollywood figure. The businessman is close friends with the police chief and with the minister in charge of the police. Arnav is warned away from the investigation, is forced to close the crime scene and allow construction to continue, and told he was going to be “promoted” to another department on the other side of Mumbai.

Complicating things further, the laws have changed again and the Blue Bar can resume its previous brand of entertainment. The bar owner has offered Tara a large amount of money to return and train new dancers for one week, also leading their dances on the stage. But, there is another job he wants her to do. She is to go to a rail station and stand, holding a pose for a short time, then leave. The client has a specific set of instructions, instructions which require Tara to wear a blue sequined sari.

There is nothing about this book that I don’t love. The setting of modern Mumbai is so rich with opportunity for a writer. Bollywood actors, wealthy businessmen and women, slums and high rises, beaches and hills, the ultra rich and the homeless, dedicated cops and official corruption. Mumbai is among the top 10 largest cities in the world, and just like NYC or Mexico City or London or Shanghai or any other megalopolis, if you can make it there you’ll make it anywhere. When that many people are trying to make it in a city, a writer with the skill and hard work of Damyanti Biswas can create magic.

When I read a book set in a far off (to me) location, I want to get the feel of the location. Biswas’ novel has Indian characters living in an Indian city, eating Indian food and drinking Indian beverages, conducting their business in an Indian manner. If I were to travel to Mumbai, I would not spend my time trying to find a KFC or a McDonalds. I would soak up as much of the place as I could while I was there. I have always wanted to travel to Mumbai, to Delhi, to Chennai, to the many parts of this amazing country with more than a billion people. At this point such a trip seems improbable. Thanks to Damyanti Biswas’s evocative and wonderful book, I can at least capture some of it in my heart.

Our thanks to the author for our copy of an ARC of The Blue Bar, scheduled for publication in January, 2023.