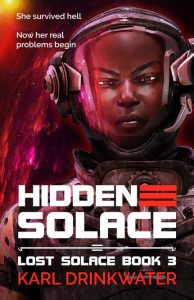 Opal has found her sister, Clarissa. They have escaped from the Null space, a different dimension which can provide a path to travel among the stars. It can also swallow ships unexpectedly, disgorging them years or even centuries later with both humans and technology completely altered and dead. Somehow Clarissa had survived there for fourteen years, but during those fourteen years she did not age. Opal was physically fourteen years older. Clarissa remained physically a child. Her mental and emotional state could not be determined, as she did not talk or seem to recognize her surroundings.

That’s the good news. The bad news is that they emerged from Null space far from Opal’s AI ship/friend, Athene. And the worse news is that they were captured by agents of the NSF, the corporate governance of the inhabited worlds, and definitely the bad guys in our story.

Opal is being held prisoner. Her jailer is determined to break her will. He is assisted by an AI robot who may resemble a human physically. Given her fondness for exquisite torture of her prisoners, she actually resembles some humans mentally and emotionally as well. Clarissa is being held in the same place but Opal does not know where and has not seen her.

And Athene is missing. Opal is told she is dead. She does not believe this. Her jailers lie to her. She still holds out hope, and comes up with a desperate plan to send Athene a message.

Although this is a science fiction novel and is obviously inspired by the “space opera” subgenre, author Karl Drinkwater has actually written more of a psychological thriller. How effective would the physical torture and psychological manipulation be in breaking Opal’s will? What effect would the crushing of hope have? Rewarding good behavior by momentarily reuniting the sisters, then punishing negative behavior by removing Clarissa?

Perhaps most chillingly, what happens when an ally betrays you?

Drinkwater has generated a universe with cruel corporate governance, sentient AI personalities, significant racial discrimination and economic disparity, and a love story between a woman and her sister and a non-human. Not all love is sexual, not all family is biological, and not all perspectives are equally true. At the end of this novel I was left looking back at what I just read and saying to myself, “I’m glad I don’t have to wait for the next book to come out.”