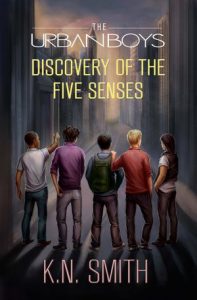 The Urban Boys: The Discovery of the Five Senses begins with a vicious fight that turns into a brutal murder. We don’t initially know much more than that. Later we do find out much more about what happened that night, but at the very beginning we are like the couple who heard the murder and hid in fear from the murderer: unsure and realizing we are entering something very new.

Twenty years after this murder, five friends are making their way through life. High school, girlfriends, college applications, football games, these boys have grown up together and where one can be found the hother four are probably nearby. Kinsu Yamada is a star athlete, quarterback of the football team, and a beat master laying down some sick tracks. (You may need to find a teenager to translate that last phrase.) Chase Freeman’s sport is baseball. Jordan Parker is also on the football team along with Rhee Smith. The final member of the group, Alex Morales, is a talented artist hoping to become an architect.

One night the boys decide on a whim to visit the forest near the town. Although there is no specific law against it, most people shun the forest and most parents forbid their children from visiting there. The reputation is that 20 years ago there was a vicious murder in the forest and the killer was never caught. But boys like to test themselves, and the five of them decide that they will be fine since they are all together.

In the forest, though, something very strange happens and the boys wake up back in the room where they were supposed to be spending the night. They make their ways home, and immediately go back to sleep, utterly exhausted though not sure why. When they wake up, something is different about them, about their town, about their destinies. They have been chosen to fight a coming darkness, one that is not just a threat to their community but also toward humanity itself.

K.N. Smith gives time to each of the boys as well as to some of the important people in their lives: Alex’s girlfriend Josie, Jordan’s little brother Mason, and the mysterious Mrs. Perkins–an elderly lady who sits rocking on her porch and seems to know everything that happens anywhere. The Dark Man and Alina, who become mentors to the boys. And Druth, the nemesis to the boys, their town, and the entire world.

There is a lot to commend this book, between winsome characters, a creative and fast moving plot, and plenty of room for friendships, families, and romances to continue blooming in sequels. My concern is that the book feels to this non-expert as a story for tweens rather than for teens. Since the only marketing information I’ve seen for this book is aiming for a teen audience, it might miss what I think would be a more natural fit for the text.

Our thanks to The Write Reads for our copy of The Urban Boys: The Discovery of the Five Senses, provided so we could participate in this blog tour. The opinions here are solely those of Scintilla. For other perspectives on this book, check out the other bloggers on this tour.

One thought on “Blog Tour: The Urban Boys: The Discovery of the Five Senses, K.N. Smith”