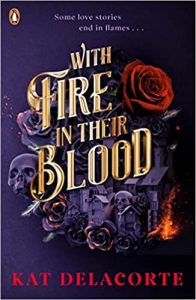 Throughout this book, a book that virtually demanded to be read in one sitting, I kept thinking of Maurice Ravel’s “Bolero.” Beginning quietly, the song builds in intensity throughout. With a driving percussion maintaining a consistent pattern behind variations on a common theme as each instrument enters, the music pounds and swells and expands to a crescendo. The simple direction given from the composer was to end it as loudly as possible.

With Fire in their Blood builds slowly. Lilly, an 11th grader in the US, has moved with her father to a small town in Italy. She does not want to be there. She doesn’t necessarily want to be anywhere else, but moving from Maine to Italy was definitely not on her list of things she wanted to do. However, her father has been offered a job by the town upgrading its power grid and Internet connection. Her mother killed herself six years before and her father has decided it’s time to try to restart their lives in a new country.

Almost immediately Lilly realizes things are different in Castello. Very, very different. The first day of school she runs into a boy, as in, literally runs into him, and she feels a very strange spark within her. Not merely attraction, she feels something unfamiliar come alive within her. Then, uniformed adults, “Enforcers,” enter the school and test the blood of all of the students. Apparently this is a once monthly requirement to screen for…something.

Her first history class requires the watching of an old movie about the town, one that hails the wisdom and power of “The General,” who is the unquestioned ruler of the town. The General had brought an end to centuries of fighting within the town. As a child he was the sole survivor of a terrible fire in the church, a fire set by two children who were “Saints.” The Saints, or perhaps they were witches, had telekinetic and telepathic powers that made them coveted by the rulers of the town as soldiers in their fight to control the entire community. When The General walked out from the ashes, he immediately brought the town together in opposition to the Saints. Beginning with his own brother, The General ordered any persons of power executed by burning at the stake. This united the town…to a point. It remained divided in reality, one faction living in wealth on one side of the town center, the other in poverty on the other side. Crossing the border between the sides was treason, and treason was subject to execution.

Kat Delacorte keeps building the tension, bringing in more characters, building more of the history, revealing more of the past, sharing more hidden agendas. Enemies become friends, friends betray friends, and Lilly learns again and again that history carries an inescapable weight. Everyone has an agenda, everyone wants something, and Lilly finds herself in the middle of a battle she did not start, at the center of a divide she does not really understand.

There is the promise of sequels, and I for one hope they come. This book would find a home on either YA or adult shelves. For readers who enjoy a dark fantasy set in the present, this is an excellent book to add to their collection. And, maybe, an excuse to play Bolero.

Our thanks to The Write Reads for our copy of With Fire in their Blood, provided so we could participate in this blog tour. The opinions here are solely those of Scintilla. For other perspectives, check out the other bloggers on this tour.