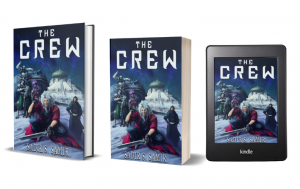 There is a genre of movies and occasionally television shows that sees a singular leader with a
vision collect a group of talented individuals, often thieves, to complete a challenging heist. The
television show Leverage entertained my family for several years. Oceans 11 and its sequels,
the long-running Fast and Furious series of movies (pretty sure F and F 34 is in production),
The Italian Job, and many others follow this pattern to audience delight and box office success.
The Crew starts off with a bored assassin completing a mission. Varcade quickly demonstrates
incredible skill, snarky attitude, attention deficit, and an apparent lack of remorse. His job
requires him to bring the body to the assassin’s headquarters, but he gets distracted along the
way and trades the body for a toy.

The chief assassin is not impressed.

Soon after a wealthy man arrives with a mission for Vorcade. He is to kill the ruler of another
city. Edghar used to be the spymaster for the ruler, but she had recently begun making some
dark choices and was leading her city into a civil war. He has put together a plan that requires
the support of several specialists. He needs to recruit a sharpshooter and a resistance leader to
the group as well.

Sadir S. Samir’s world is quite diverse. Humans exist with demons, necromancers, intelligent
worms, and many other creatures. Demons come in many forms and some can modify their
bodies at will. However, there is a bitter civil war between humans and demons. Recruiting
demons for their cause will be very difficult. Trust is lacking on both sides.

This book is not without its flaws, but overall it is an enjoyable romp. It is creative, fun, and filled
with adventure. More attractively to me, it brings together a diverse cast of characters who seem
to have nothing in common but who find ways to work together. And it shows mercy,
forgiveness, and compassion between the most unlikely of characters. In a world full of
negativity and hostility, reading something with a found family working together to accomplish
good is a refreshing treat.

Our thanks to Love Books for our copy of The Crew, provided so we could participate in this
blog tour. The opinions here are solely those of Scintilla. For other perspectives on this book,
please check out the other bloggers on this tour.