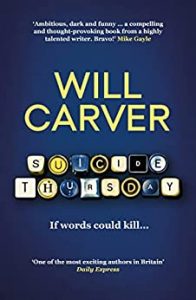 I was worried when I finished this book. I really enjoyed it, but I could not really think of any way
to fittingly describe it. After I read some other reviews from fellow bloggers, though, I realized it
wasn’t just me.

Told primarily though not exclusively from the POV of two characters, Eli and Jackie, the book
takes place in the days before and after the suicide of their mutual friend, Mike. Mike had given
signals that he was depressed and suicidal, but he had done so for years. One fateful Thursday,
once he has finished varnishing his floor, Mike sits down on his newly varnished floor and inflicts
fatal wounds on himself. This was not a cry for help. His wounds did not allow for any rescue or
recovery.

The book is not really about Mike, though he certainly has a pivotal spot in the action. Eli has
been Mike’s best friend for years. Eli is stuck in a job that he hates but can’t bring himself to
quit. He wants to break up with Jackie but can’t bring himself to end it. He wants to become a
writer but can’t move beyond the first chapter. In fact, he has a library of first chapters, all of
which start promising a novel and none of which can get any farther than the words, “Chapter
Two.”

Jackie is enthusiastically Catholic. Maybe. She goes to confession daily, and given the intimacy
of her relationship with Eli she has no shortage of things to confess. Her Catholicism does not
extend to actually conforming her behavior to the teachings of the church. It does give her a
fervent view of her own sinfulness, albeit as she willfully continues “sinning.” (I’m not judging,
she judges herself quite enough for everyone.)

Everything changes on Suicide Thursday. Eli and Jackie are profoundly affected by the
tragedy, albeit for very different reasons and in very different ways. Plenty of secrets get
revealed in the aftermath, some of which had nothing directly to do with Mike but came to light
because of the new directions others take after that Thursday.

Will Carver does not flinch from the more terrible aspects of Mike’s suicide. Nor does he wallow
in them. Mike is not a martyr nor a hero. He is not selfish or angry. He is profoundly and fatally
depressed. He knows enough about the human body to make sure that the wounds he inflicts
on himself are unalterably terminal.

This non-chronological book featuring some of the “least likely to share a drink with” characters
you are likely to find among fictional protagonists is not always the easiest read. Difficult subject
matter, annoying characters, and unorthodox narrative style ask for an investment from readers.
That investment, though, pays off in spades. Carver has written a brilliantly different book that digs deeply into the psyches of its characters and reveals some humorous and difficult truths
that show all of us more about ourselves.

Our thanks to Anne Cater of Random Things for our copy of Suicide Thursday, provided so we
could participate in this book tour. The opinions here are solely those of Scintilla. For other
perspectives, check out the other bloggers on this tour.