Book Review: There Are No Happy Loves, Sergio Olguín, translated by Miranda France 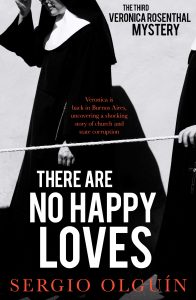 Mystery: There Are No Happy Loves, Sergio Olguín, translated by Miranda France

Part investigation novel, part reflection on the current state of Argentina, There Are No Happy Loves is darkly hopeful and wildly unpredictable. Verónica Rosenthal is an investigative journalist writing a story about a man who believes his wife and daughter survived their car accident and are hiding from him. Although there is no real evidence they survived, there is a disturbing lack of evidence that they were killed.

Federico Córdova is a rising star in the judiciary. His unit is charged with intercepting a shipment of cocaine. What they find instead is quite disturbing: human body parts. This leads him to a new investigation: where did the body parts come from and why were they being shipped. A disturbing truth emerges: these parts are in high demand from wealthy countries which use them in multiple ways that the end consumers never suspect. Although there are too many of them to think mass murder is likely, the question must be asked: are these stolen from cadavers by unscrupulous morgue and mortuary employees, or are at least some of them victims of drug violence who simply “disappeared.”

Verónica and Federico have a shared history. They were lovers when Federico worked for her father. Although the relationship did not last, there remains an unresolved tension between them which makes it very hard for them to be in the same place at the same time. As their investigations begin to overlap, though, they find themselves being put together more and more. Sparks are inevitable, and investigating corruption also includes investigating their own relationship.

Miranda France has beautifully translated this novel into English. Sergio Olguín weaves a complex novel of corruption at the highest levels of the police, the judiciary, and the church. Verónica is in danger from the mob and from other unexpected directions. Federico must tread carefully, as his investigation has caught unwelcome attention from both ranking police officials and judges. After all, people willing to transport body parts hold a low opinion of human life, an opinion that easily leads to transporting, or killing, living humans as well.

A missing daughter. Severed cadavers. Trafficked infants. Corrupt officials. Olguín brings them all together in a story that takes us through some very dark alleys in Argentina. Even accompanied by a fearless journalist, an incorruptible lawyer, and a courageous ex-nun, those alleys are full of dangers for even the most alert travelers.

Our thanks to Anne Cater of Random Things for our copy of There Are No Happy Loves, provided so we could take part in this blog tour. The opinions here are solely those of Scintilla. For other perspectives on this novel, check out the other bloggers on this tour.

Book Review: There Are No Happy Loves, Sergio Olguín, translated by Miranda France