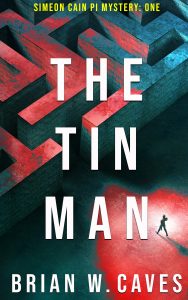 Simeon Cain gets a call from his secretary, telling him to come into the office. A potential customer is waiting for him. She is a gorgeous young woman who wants him to look into the death of her father some nine months earlier. Cain learns that she is an internationally famous model. Her father’s death had made the local papers, believed to be a mugging gone bad. She, however, is not so sure.

Cain begins looking into the death, which at first appears to be exactly what the police and the papers had concluded. But, then, he discovers some anomalies. Why had the deceased man spent the evening in a pub checking his watch, making multiple calls, and looking out the window? Why did his body show no signs of trauma apart from a stab wound? How did a random mugger succeed in perforating an artery with one single stab? And why did he give a flash drive to his neighbor just a few days prior to his death, with instructions on what to do with it if something happened to him?

And, why has the client stopped taking Cain’s calls?

Simeon Cain had been a cop until a personal tragedy led him to leave the force and start his own PI firm. He is still dealing with that tragedy by drinking too much, working too much, and sleeping too little. This case, though, requires that he be on his game as the stakes become personal. The client’s father was not the first victim and Simeon Cain may just be the next one.

The Tin Man is a delightful romp through some dark alleys in England. Author Brian W. Caves introduces us to a detective who has to battle personal demons just as much as he fights criminals. It is an even bet which gets to him first. Throwing caution to the wind may help you get your quarry. It may also end your personal suffering violently and abruptly. It could be difficult which of the two is the more desired outcome.

Our thanks to Zoe from Zooloos for our copy of The Tin Man, provided so we could participate in this blog tour. The opinions here are solely those of Scintilla. For other perspectives, check out the other bloggers on this tour.