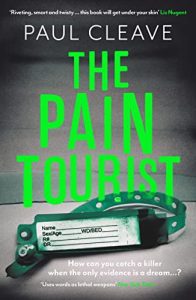 The phrase “pain tourist” is defined in this book as someone who finds personal satisfaction of some sort by visiting people or places associated with tragedies. Not surprising that The Pain Tourist explores this idea in a variety of ways through the course of the novel.

Nine years earlier, young James Garrett was shot and left for dead during a home invasion. His parents were killed. Only his older sister escaped when she fled out a window and called the police. James “died” four times on the operating table and despite the doctor’s herculean efforts he remained in a coma for the next nine years.

Long after everyone had given up hope, James woke from his coma. Surprisingly, during his coma he had continued with a vivid mental life that ran parallel to time in the real world. James had an eidetic, near photographic memory before he was shot. That memory allows him to remember specific dates in “coma world” which align perfectly with the same dates in the real world. On days when his sister read a book to his comatose body, James “read” the same book in his dream. This eventually proves to be very useful, but in his dream world his parents had not died. When he wakes, the reality that awaits him is very shocking.

Detective Inspector Rebecca Kent of the Christchurch, New Zealand police department, hopes that James can help her close the case on the killers of his parents. She is also working to catch a serial killer called “Copy Joe” because he is recreating the crime scenes of a previous serial killer. She turns for help to retired detective Theodore Tate, the original investigator of the Garrett’s home invasion.

In the midst of the police investigations, the medical miracle of James’ recovery, and the action in the plot, Paul Cleave manages to raise significant questions about life, death, and personal meaning. Never pedantic or distracting, Cleave’s characters ask questions about letting go, about moving on, about forgiveness, about life. They don’t always find their own answers, but they invite the readers to consider those questions as well. This adds a depth to the police procedural which even the best of the genre sometimes struggle to achieve.

Cleave brings together an intricate and action-packed plot, characters dealing with damage in their own lives, and a smart female detective inspector making her mark in a traditionally male career. It is one of the best mysteries I have read this year.

Our thanks to Anne Cater of Random Things for our copy of The Pain Tourist, provided so we could participate in this blog tour. And our apologies for the tardiness of this review. The opinions here are solely those of Scintilla. For other perspectives, check out the other bloggers who were on this tour.

One thought on “Book Review: The Pain Tourist, Paul Cleave”