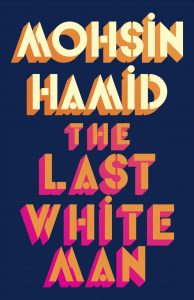 As may be indicated by the title, The Last White Man is not the easiest book to read emotionally. Two protagonists, Anders and Oona, have hesitantly begun to renew a former relationship with each other. They are not entirely sure they want to move forward, but they have known each other for years and are comfortable with each other.

Then, Anders wakes up to a new reality. His skin has changed color. He is now…brown.

He is not alone. White people around the world are changing skin color overnight. They go to bed white, they wake up brown, and they are discovering that the world has also changed for them.

In America, multiple studies have shown that people of color face serious disadvantages to their white neighbors in so many areas. Job opportunity, salary, promotion, housing. Building a highway? Mow down a minority community. New airport? Flyover the brown neighborhoods. Wastewater treatment, feedlots, chemical factories, power plants. The list goes on and on. There is nothing subtle or hidden about it. Racism may be less respectable than it used to be, but that does not keep otherwise respectable people from practicing it.

Anders responds to this change by hiding. He is scared to show his face. He finally lets Oona know, but she is not sure how to respond at first. Anders tells his father, who struggles to accept his old son’s new skin. Oona’s mother is convinced that a race war is coming, as those who were born with brown skin identify and then murder those who used to be white because “they” can definitely recognize who is “us” and who is “them.”

More and more people change. Riots and violence do break out, though most of the rioters are people who have not yet changed color. Neighbors no longer recognize their neighbors. Jobs disappear as the economy adjusts. And throughout, Anders and Oona and the rest of the world try to navigate an earth devoid of the white skin palette.

Author Mohsin Hamid uses an almost breathless narrative style to convey Anders’ and Oona’s situations. Both of them have to confront the latent racism within themselves and within their families. Can a biracial relationship succeed? Will Oona also change? How should Anders treat his boss, his coworkers, his clients? What does it mean to live as a dark skinned person in a society built to unequally advantage lighter-skinned persons? 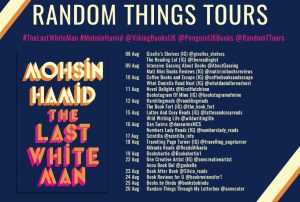 Our thanks to Anne Cater of Random Things for our copy of The Last White Man, provided so we could participate in this blog tour. The opinions here are solely those of Scintilla. For other perspectives, check out the other bloggers on this tour.