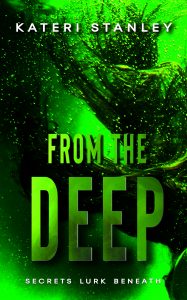 Mystery: From the Deep, Kateri Stanley

A small fishing village on the English coast maintains an ancient ritual: the culling. Every year, pods of pilot whales enter the cove. One of those pods is surrounded, isolated, and then captured. Although the village no longer needs this meat to survive, it has become ingrained as a tradition passed down from parents to children, part of what makes this tight-knit community unique.

Julian is a fisherman who has participated in the culling his entire life. A widower with a teenage daughter at home, Julian is struggling to figure out his place in the world without his wife. His friends, his coworkers (well, most of them), and his boss are there for him, but fundamentally his life has been upended and he is not sure what comes next.

In the weeks before the culling, one of Julian’s coworkers dies. Although it cannot be definitely called a murder, the man was known to be extremely careful and was unlikely to die in a freak accident. With a number of animal rights protesters gathering to protest the culling, some of them threatening violence toward the fishermen and the townsfolk, suspicion falls on a local agitator. There is no proof, he has an alibi, but during tense situations those rational voices lose their impact.

Julian’s worry for his daughter, his grief at his wife’s death, his anger at the murders of his coworkers, and then a violent attack on his house lead him to the edge of a breakdown. How could a killer be hiding in their small town? Who would attack his home?

And then, just as importantly, just who is that extraordinary young woman that has suddenly arrived?

From the Deep is one of those genre-bending novels that I absolutely love. There is a mystery. There is some romance. And the title hints at some of the fantastical elements that reveal themselves in the course of the story. For not everyone in this small town is what they seem to be, not every story is known to everyone else, and not every crime has a clear resolution.

Author Kateri Stanley has written a book that swept me away. Julian was a very relatable character to this middle-aged reviewer. He is guided by one north star: what is best for his daughter. Of course, sometimes his daughter has her own views about what is best for her and those views do not always match her father’s opinions. They disagree about relationships, about boundaries, about Internet use, about all the things that fathers and daughters argue over. Both of them, though, are coming from a position of love for the other. 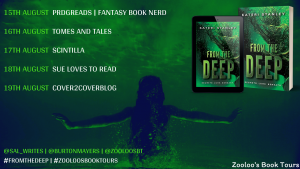 Our thanks to Zoe of Zooloos for our copy of From the Deep, provided so we could participate in this blog tour. The opinions here are solely those of Scintilla. For other perspectives, check out the other bloggers on this tour.

One thought on “Blog Tour: From the Deep, Kateri Stanley”