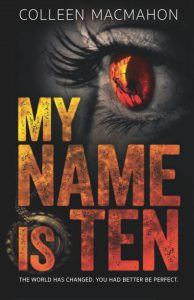 Do yourself a favor. Put the name, “Colleen MacMahon” somewhere you won’t forget. Then again, I suspect she may become an author you are unlikely to forget. Regardless, put it somewhere on your calendar (or diary depending on the version of English you use), enter it in your phone, save it to your computer. You don’t want to miss her next book. Right after you save her name, get a copy of My Name Is Ten.

My Name Is Ten is the story of two members of the same family living near the end of this century. Earth was pummeled by a series of solar storms and flares. The result was massive climate change, dramatic transformation of the land masses, and enormous loss of life. Civilization collapsed. Mass extinctions created opportunities for invasive species to expand. And power and wealth were concentrated in the hands of a very few oligarchs while most people lived in abject poverty or in slavery.

Yes, slavery returned. In this context we meet Akara. Akara was the daughter of a woman who longed to become at least somewhat wealthy. One way to do that was to sell your children. Akara was raised to become someone special–but not in any way we would recognize today. She was beautiful, gracious, educated. The perfect young woman to become the concubine of a wealthy man, or the main attraction in a brothel. And at the age of fourteen, Akara was taken into the town, put on auction, and sold.

Ash was raised as Akara’s brother, but their mother had no love for him. He was the wrong color, the wrong body type, the wrong sort of person to receive any kind of decent offer at the slave market. He loved Akara, watched out for her, but had to sleep with the animals in the shelter outside and was often beaten. One day he just disappeared, and Akara did not know if he had fled, been sold, or was dead.

Hopefully from just this brief description of the situation you are able to see how involved and intricate MacMahon’s world building is. She has done extraordinary work in vividly constructing a harsh and cruel environment, then peopled it with interesting and provocative characters. The story really is the bildungsroman of the two major characters, but the side characters are quite interesting and they are not just window-dressing.

Without giving away spoilers, let’s just say that our two characters find their paths intersecting again. Akara rises to the level her mother intended…but things happen. Ash grows into a man of substance and worth, though not in the eyes of their society. And MacMahon gives us plenty to look forward in the next installment of this series.

My main takeaway from this novel was the intrinsic value of a person. Akara is, quite literally, worth a great deal because she is young and pretty and (presumably) fertile and educated. Ash is worth nothing because other than being young he has none of the other characteristics of Akara. Yet both of them discover new ways of determining their value, value that comes from within rather than from the judgments of society. Ultimately, all of us have to find that same truth for ourselves. 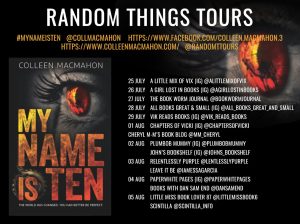 Our thanks to Anne Cater of Random Things Blog Tours for our copy of My Name Is Ten, provided so we could participate in this blog tour. The opinions here are solely those of Scintilla. For other perspectives on this novel, check out the other bloggers on this tour.

One thought on “Blog Tour: My Name Is Ten, Colleen MacMahon”