Book Review: Owls of the Eastern Ice: A Quest to Find and Save the World’s Largest Owl, Jonathan C. Slaght 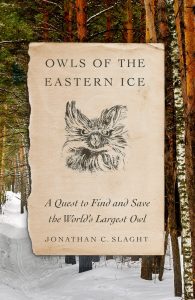 Nonfiction/Science: Owls of the Eastern Ice: A Quest to Find and Save the World’s Largest Owl, Jonathan C. Slaght

I might have been vaguely aware of the existence of “fishing owls” before reading this book, but I knew nothing beyond the name. Of course the name is a bit of a spoiler: they are owls and they eat fish. Mostly found in far eastern Asia, various species and subspecies can be found in Indonesia, Japan, South and North Korea, China, Russia, and probably some of the other countries in that region. The largest of the fishing owls, indeed, the largest owl in the world, is the Blakiston’s fishing owl. One subspecies is found in Japan, where populations are recovering after a collapse many years ago. Their larger cousins, though, are in Russia, in the taiga forests south of Siberia, primarily in the forested valleys near rivers. They do not migrate, they live in breeding pairs year round in nests built in the hollows of large trees, and they are very endangered.

Owls of the Eastern Ice is definitely about the owls. I learned a great deal about the birds. They are the size of an eagle. They do not disgorge “pellets” the way other owls do–fish skin does not cohere as well as the fur and feathers other owls consume. They rely on warm water fishing holes in Russian rivers during the winter, places that remain ice free usually due to the release of radon gas from the ground. The radiation provides just enough heat to melt the ice and give the owls access to their food.

However, this book is more of a memoir than a study of the owls themselves. Slaght introduces us to his Russian colleagues in collecting the data. They are serious and dedicated men willing to endure great hardship to collect the data. There are occasionally cultural misunderstandings between the American and the Russians. There are also cultural differences that Slaght finds challenging. In rural Russia, if a vodka bottle is brought out when there are guests, politeness demands that the bottle be finished before the guests leave. This meant a lot of vodka was consumed during the study. We also meet some of the people who assisted in other ways: the reclusive hermit who opened his home to them, the couple who allowed the team to use their hunting cabin, the FSB officer who guided them at one point (and revealed that they had some kind of dossier on Slaght).

Owls of the Eastern Ice is a book about owls and the people who care about them. It is a revelation of the difficulties of studying wild animals. And it is a celebration of the pursuit of knowledge, especially when that knowledge can be used to save other species or even our own.

Book Review: Owls of the Eastern Ice: A Quest to Find and Save the World’s Largest Owl, Jonathan C. Slaght