Book Review: By Her Own Design, Piper Huguley 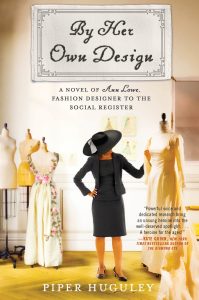 I am not often drawn to fictionalized biographies of actual historical figures. Sometimes, though, they are the only way to share a life’s story when the details are obscured by history. Contemporary records are scarce for many people: women, minorities, victims of oppressive regimes.

Or when that life belonged to a black woman living in the Jim Crow south.

By Her Own Design is subtitled, “The Story of Ann Lowe, Society’s Best Kept Secret.” It tells the story of a black woman who grew up in the rural south during the early part of the 20th Century. Annie was raised by her mother and her maternal grandmother. They were well- known seamstresses who catered primarily to wealthy white women in Alabama. Annie began early, teaching herself to make cloth flowers which she could sell for “pin money.” These flowers later would become part of her signature dresses.

Eager to join the adult world, far too eager, Annie married her first husband on her 12th birthday. He was manipulative and abusive and for many years it looked like her lot was to be trapped with him for her entire life.

Annie continued to make her own clothes as well as quietly working on dresses for local elites. Then fortune smiled on her. A chance encounter with a wealthy Tampa socialite who was vacationing in Alabama led to an opportunity. She was offered the chance to become the family’s seamstress. Taking her young son, she moved to Tampa and began catering not only to this family but to other members of Tampa’s society.

The highlight of Ann’s career came decades later, after she had moved north to New York. There she began designing and making dresses for a prominent member of the social register and her daughters. The oldest girl, Jacqueline, was pursued by some of the most eligible bachelors in the country. She asked Ann to design her wedding dress. That dress became one of the most iconic dresses of the 20th Century, as Jacqueline married a young senator from Massachusetts named John F. Kennedy.

Piper Huguley had to invent details and dialog to flesh out her story because the reality is that a black woman from rural Alabama would have been virtually ignored by contemporary records of that era. Indeed, even the census of 1910 raises questions that cannot be answered now.

Despite that, Huguley writes Ann Lowe’s story with affection, admiration, and sympathy for her subject. She does not flinch away from difficult subjects or character issues. Lowe was always more committed to her career than she was to her husbands. (In fairness, what may be seen as a flaw in a woman is often seen as a strength for a man. Double standards remain alive and well even today. And no 12-year old should be worrying about a husband!) Her bookkeeping was indifferent at best, and one store was shut down for unpaid taxes.

None of this changes the incredible talent, determination, and hard work that it took to succeed as a black woman before the civil rights movement. Ann Lowe quietly shaped the standards of fashion for decades. Her story deserves to be shared. 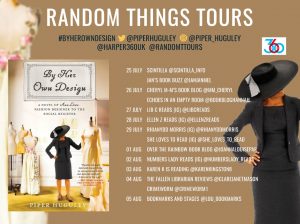 Our thanks to Ann Cater of Random Things Blog Tours for our copy of By Her Own Design, provided so we could participate in this blog tour. The opinions here are solely those of Scintilla. For other perspectives, check out the other participants in this tour.

Historical Fiction: By Her Own Design, Piper Huguley