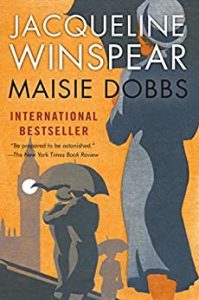 Every so often I run across an older book or series that makes me question my reading choices from years gone by. Maisie Dobbs is one of those books.

Jacqueline Winspear’s protagonist is a private investigator in London during the years following World War I. Maisie Dobbs was a girl from a poor background who was sent to work for a family as one of their household staff. Soon after arriving she impressed the matron of the house with her intellect and became a special project for the woman. Maisie received private tutoring and eventually qualified for entrance to Cambridge. When the war broke out, Maisie left college to serve as a nurse on the battlefront.

Upon her return, she finished her studies and then took over her tutor’s private investigation service. Although she was a woman in a man’s field, the reputation of her mentor opened doors that allowed her to become successful.

The specific mystery centers on a young wife. Her husband suspects her of infidelity. Maisie quickly discovers that she is innocent of the accusation, but a larger related mystery gets her attention. The woman has been visiting the grave of a man who was injured in the war and later died. Maisie suspects there is more to this story and looks into the circumstances surrounding the man’s death.

It’s easy to simply categorize this as a mystery/historical fiction. It is much more than that. Maisie Dobbs is a lengthy exploration of the hidden costs of war. The protagonist herself was wounded in the war. The man she loved suffered a traumatic brain injury and resides in a hospice, unaware of his surroundings and unable to even feed himself. Her assistant was also injured in the war. Every person in this book was somehow affected by the war and its aftermath whether they served or not.

The mystery itself is smart and involved. But I was much more drawn to the characters within the book and to their various traumas related to the war. Perhaps it’s the timing: Russia’s invasion of Ukraine is a little more than a month old as I write this. A new country and new generations of people will face some of the same issues as Winspear’s characters. Unfortunately, the aftermath of war is experienced by far too many people around the world, and new wars continue to add to their number.