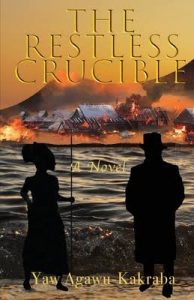 I really don’t know what I was expecting from this book. Going into it, I vaguely knew that it was about a black Brazilian slave who had aspired to become a slave-trader himself. I met the author at a social event for the Nittany Valley Writers Network, a local group of writers that has become an increasingly important part of my life. A professor at Penn State University, Yaw Agawu-Kakraba is a scholar fluent in multiple languages who has written several books. This, however, is his debut novel.

The protagonist, one Pedro de Barbosa, was born into slavery in Salvador, Brazil. An intelligent child, a series of misfortunes rebounded to his good fortune when he was raised in the master’s house by his housekeeper/mistress. She arranged for him to be educated secretly by trading the only currency a slave had: her body. Pedro learned to read and write, to copy scripts with perfection (we might call that forgery today), and to navigate the challenges of being enslaved.

I will never fathom the apologists for slavery. Reading Pedro’s story brings home the brutality, the humiliation, the inhumanity of the condition. Men and women stripped and whipped for the smallest of infractions–or no infraction at all other than being in the way of a white man with a bad attitude. Humans kept in squalid conditions, with urine and feces coating the floor of their prisons. Life treated with a casual disregard. Horses were kept in better conditions and treated more decently than the men, women, and children subject to enslavement.

Pedro’s story continues from the master’s house to the city streets, to the European capitals of Lisbon and London, and finally to the coast of Africa. There he finally attains his desire. He becomes a señhor. He does so in the only way he knows how: he trades slaves.

It is one thing to intellectually understand that the children of abusers often become abusive themselves. It is quite another to look through the eyes of a creative and thoughtful protagonist who has abandoned any sense of morality and decency in order to accomplish his goals. At times I wanted to engage with him: “Can’t you see what you are doing? Can’t you see what you’re becoming? How can you do this?” (In a very unusual and creative move, the author breaks through that wall between creator and creation and makes an appearance in his own story to do something similar to that.) But no one, not even author Agawu-Kakraba, can change the fate Pedro is writing with his own choices.

English is not the author’s first language, but it is hard to imagine him writing any better in one of his earlier languages. His vocabulary, his imagery, the power and emotions conveyed through his words show a mastery far beyond the typical. He weaves in words from Portuguese and from various African languages almost like an Umberto Eco. Perhaps coming to English as a fourth or fifth language gave his studies an intensity, because he has mastered the written word as well as any author I have read in many years.

The Restless Crucible is often a difficult book to read. The emotions and descriptions are raw, ugly, hard to look at and impossible to look away from. The English vocabulary is rich and broad–I had to keep a tab open to an online dictionary which is not something I do for very many books. The author’s characters speak a variety of different languages, and if there is not an adequate English translation the author allows them to use the word they choose from their own language. But it is a book that rewards the diligent with a sweeping powerful, personal, intimate story of one life that bears in it the scars and breaks that centuries of slavery marked on the skins of all who were part of this vile transaction, whether willing participants in it for the gold or helpless victims in it for life.

Reading can and often should be an immersive and multi-sensory process. One opportunity to get more involved with this book comes at the end where the author includes some of the recipes for foods mentioned in the book. It certainly won’t give you a taste of the character’s lives, but it will give you some of the flavors of their homes.

Our thanks to the author for his kindness in providing both an advanced electronic copy of the book and a personally signed physical copy.