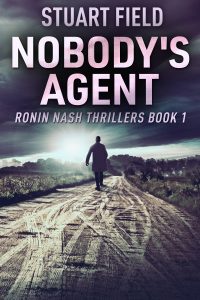 Before I get into the review, I have a question. Is there some database somewhere that thriller writers consult to find names for their protagonists? There seem to be certain expectations. The last name should have some punch: Smoak, Gentry, Steel, Reacher. The first name should be simple but strong: Evan, Court, John, Jack.

Ronin Nash. Author Stuart Field must have gone deeply into the database to get that name. Solid punch with the last name, Nash. That first name, though. At points I wanted to ask Nash’s father (Mac, who is also a character in the book) whether he chose the name “Ronin” in order to guarantee that his son would some day grow up to become the protagonist of a thriller. “Ronin” in history were samurai who did not answer to any one master. Free agents, or mercenaries, they followed their own direction and did not swear loyalty to any single lord–or if they did, they were no longer ronin.

Ronin Nash, former FBI agent, is done with the game. He is living in his family’s old ramshackle house by a lake in the woods of southern Pennsylvania. Having lived there for a year, it is significantly less ramshackle than it was. He is retired, fixing his house, fishing whenever he wants, far away from the demands and pressures and politics of government.

Then, his former FBI boss shows up. It’s just one case. Only one. The boss is heading up a new agency, the IIB, and there is a curious situation in a small upstate New York town. Bodies have been found in an abandoned mine. Were they murdered? Did they die from natural causes? Why has the sheriff called for outside assistance? Something is off and he needs his best investigator back on the job.

I don’t think it’s a spoiler to mention that Nash does accept the case and travels to upstate New York. An attractive deputy is waiting to escort/chaperone/watch Nash work.The further the investigation goes, though, the more confusing it becomes. Soon the two bodies become three, then four. Then the deputy disappears, there is another murder, and the simple in and out case Nash was promised has become the polar opposite.

Stuart Field has written several thrillers with British agent turned NYC cop John Steel. With this new protagonist he changes the game a bit. There are some broad similarities between the characters, but they are clearly different and Field does a great job describing those differences. Steel was born into money and lives in fashionable clothes. Nash wears jeans with his sports coat when he has to dress up. He prefers to blend in, not stand out. No one is going to accuse him of living in a bat cave. His best weapon is his mind. Nash looks at the world quite differently than most do. That makes it hard for him to fit in, to “play well with others.” It also lets him find clues and comparisons that do not stand out to others.

I usually figure out “whodunnits” well before the end. The fun is seeing just how the author brings things together. But Nobody’s Agent truly kept me guessing until the very end. The action was intense but well spaced so that the reader has a chance to breathe. The plot was truly convoluted and the ending was surprising, if not shocking.

This may be Ronin Nash’s first book rodeo, but he is in good hands with author Stuart Field. I am looking forward to following his next adventure, probably more than he is since he was really hoping to go back to his house by the lake. My guess is that return may take a while. 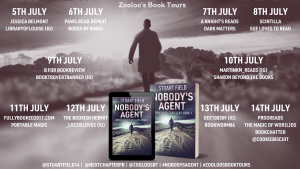 Our thanks to Zoe from Zooloos Book Tours for our copy (YAY, a physical book!) of Nobody’s Agent, provided so we could take part in this tour. The opinions here are solely those of Scintilla. For other perspectives on this novel, check out the other bloggers on this tour.