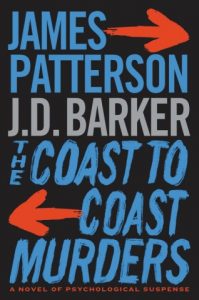 When James Patterson writes a novel there are certain things you come to expect. Short, action-packed chapters. Lots of action words. Dynamic plots.

When J.D. Barker writes a novel there are certain things you come to expect. Violently twisting plots. Red herrings and false directions. Lots of dead bodies.

When you put them together, you end up with The Coast to Coast Murders.

Cross-country trucker Michael Kepler comes home to his L.A. apartment when a neighbor complains that water is dripping down into her own apartment. The reason for the flood is easily discovered: the bathtub drain has been blocked by a towel and the water left running. He knows he did not do this. He is not sure whether the unknown dead woman under the water did it or not.

When he calls the police, they immediately suspect him. Their suspicions seem to be confirmed when they find pictures of him with the dead woman, including a video of them having sex. Some of Kepler’s clothes are at her house, texts and calls between the cell phones establish more of a connection, and he is taken into custody.

Kepler swears he didn’t do it. He didn’t know her, he never killed anyone, someone is trying to frame him.

Intense? Oh, we’re just getting started! A trail of bodies across the country all seem to point toward Kepler being a serial killer. The deaths coincide with stops his truck made in those localities. With each of the bodies the killer left a calling card: a sparrow’s feather. A bag of feathers is found in Kepler’s truck, apparently confirming his guilt.

But Kepler himself has managed to escape. Fleeing east, more deaths trail in his wake. But things are not always what they seem, especially when Barker and Patterson are at the wheel.

I find nothing wrong with escapist fun, and that is exactly what this book provides. If the plot is a bit far-fetched, the action sometimes defying logic, the decisions occasionally more reflective of Hollywood than Quantico, the police and FBI in turns brilliant and clueless to what is right in front of them, that simply goes with the thriller territory. This is a book to put COVID out of mind, to escape from reality for a while, to give your mind a chance to wander through possible “what ifs” that are engaging and provocative. And if the twists at the end leave you a bit breathless, well, all the best amusement park rides do.

Let’s do it again!