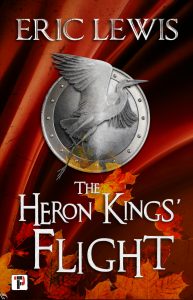 Linet lives in the Lodge of the Heron Kings, a secretive band of orphans and castouts who live together, train constantly, fight and plunder occasionally, and above all keep their lodge a secret. They are so skilled in hiding and ambushing, so ruthless in their fights, so quick to disappear that most people believe they are the stuff of myth and legend, bogeymen of the forest.

So when the tables are turned and an old enemy is able to ambush a raiding party of the Heron Kings, the implication is clear: they have been betrayed. One survivor, Aerrus, returns to the lodge with word of the massacre and with the news that a group of six men who appeared to be among their allies had left just as the ambush began and were allowed to leave without being challenged by the enemy. Linet and Arreus break with protocol and command to pursue these men. They kill five of the six, but one escapes to bring word of their existence back to his lord.

In a garrison town near the mountains, soldiers and townsfolk alike gather to hear the story of this escapee. His tale captures the attention of an old soldier and his young friend. Eyvind had not been a soldier long, but the region had been at peace long before he took up arms. Other than training, he had never fought a battle nor been near one.

These small events herald a much larger wave coming. A messianic figure from across the mountains has decided to invade. Using spies and infiltrators he has sought to weaken the kingdoms before bringing his massive invasion force over the mountains. And Eyvind, Linet, and Aerrus become central figures in the war to save their land and their people.

Eric Lewis has written an adventure story that is more of an alternate possible history of an unknown country than the typical fantasy. No elves, dragons, or magic in this one. Bows and arrows, swords and daggers, and a mysterious chemical that can violently explode are the weapons of this book. Our heroes must rely on their intelligence, their bravery, their friends and each other to stay alive and fight the invaders. More King Arthur and less King Aragorn.

In some ways, that makes for a more exciting adventure. It’s hard to put yourself in Gandalf’s robes or Harry Potter’s glasses. Magic is cool, especially when tents get bigger on the inside than they look on the outside. But face facts: we are muggles, every one of us. That Hogwarts letter is not coming, no dwarves are going to show up at our door, and dragons remain hidden in our imaginations and not in our mountains or rivers. Although we do not live in semi-feudal early medieval times, we can put ourselves mentally into the shoes of a peacetime soldier who never expected war. We can envision ourselves forced into battles we did not choose. We can in these times following the invasion of Ukraine picture an overwhelming army coming at us…and a plucky band of natives doing everything possible to repel the wave. And (hopefully) succeeding against all odds.

Lewis does not shy away from brutal descriptions of war. This is no sanitary book where the violence occurs off the page. People die. People get cold, and sick, and do awful things they never thought they could possibly do. Sometimes battles are fought with high ideals of protecting family and property. Sometimes they are just a bloodlust for revenge. And the same people can engage in both battles, sometimes within the same hour. This may be a fantasy, but the blood, sweat, and tears feel very, very real. 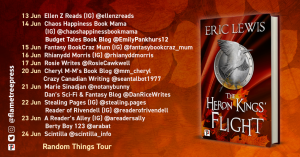 Our thanks to Anne Cater of Random Things Blog Tours for our copy of Heron Kings’ Flight, provided so we could review it. The opinions here are solely those of Scintilla. For other perspectives, check out the other bloggers on this tour.