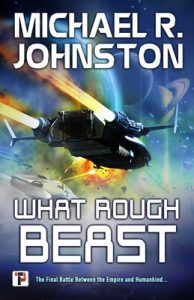 I was 10 years old when Star Wars exploded onto movie screens. It was a very different entertainment world than today. The movie was showing in one theater in Denver. One. After pleading with my father, he finally relented and took me to see it (my first PG movie!). The line wrapped around the building, allowing enough in to fill the single auditorium of the classic movie house and requiring the rest of the queue to stand for another couple of hours until the next showing.

It’s a very different story using a very different medium and released into a very different time, but What Rough Beast brought many of those memories back to me. Michael Johnston tells the story of a gathering alliance of humans and aliens who are unused to trusting other races, much more experienced at war than at cooperation, uncertain whether their goals truly align. The perspective is through the eyes of three characters we got to know in the previous books of the series: Tajen Hunt, once a pilot and fighter for the Zhen Empire and now defender of the newly rediscovered Earth; his husband Liam, an experienced soldier and engineer; and their friend Katherine, a pilot and ship’s captain. In the last book, Katherine was believed to have been killed and Tajen disappeared. Here we find that Katherine was rescued by an alien race long thought to be ruthless and brutal killers, willing to depopulate a planet rather than surrender it to an enemy. These same aliens also rescue Tajen and bring him to meet with Katherine aboard one of their ships. On board that ship, a desperate plan begins to emerge.

Liam, believing his husband and his best friend have both been killed, reluctantly assumes leadership of the ragtag group of ships carrying fighters and refugees from Earth. Although they are using coded transmissions and secret destinations, Zhen spacecraft are seemingly a step ahead of them at every jump, waiting to pick the ships off one by one until they are all gone.

As the protagonists pursue their individual missions, Johnston effectively weaves the stories together and brings them to a thrilling conclusion. Space battles and hand-to-hand combat, unexpected allies and devastating betrayals, converging interests and diverging goals. Hang onto your hats, folks. It gets wild.

Johnston is very effective at balancing the political with the action. Forgiveness and redemption factor in. So does intractability and an insatiable thirst for revenge. Sentient AI fight for all sides, Zhen fight against Zhen, humans against humans. Neither side is entirely right or entirely wrong, and sometimes the most dangerous battles are the ones you choose not to fight. The old adage, “The enemy of my enemy is my friend” gets stretched to its limits, and everyone must learn that there is more to being friends and allies than a common opponent.

Our thanks to Anne Cater of Random Things Blog Tours for our copy of What Rough Beast, provided for the book’s release. The opinions here are solely those of Scintilla.