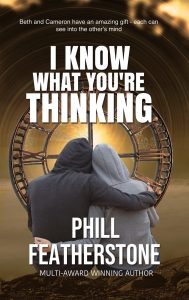 Beth and Cameron. Cameron and Beth. It’s been that way since they first met. Inseparable as they grew up, the two of them were the very best of friends. Then they became more to each other. And as they neared the end of their schooling and began looking for colleges, they wanted to make sure they went to the same city even if they were not in the same university.

Not perfectly. Not always. But often enough. Like the time Cameron had an accident, and Beth met him at the hospital before he could call her. And the time they were in the same class and took the same test…and gave the same answers.

However, strange things are happening in their town. A young man has gone missing, possibly kidnapped. His father will do anything to find him again. And then, Beth can no longer sense Cameron. Unlike the accident, unlike the test, unlike any time of her life since she first met him, Cameron is completely hidden from Beth.

Phill Featherstone’s novel is a little bit fantasy/science fiction. It takes place in a near future world where Scotland is independent, where the border between England and Scotland is guarded, where everyone’s genome is mapped and where everyone must carry a “life card,” part ID, part “we know everything about you” gift from the government. It is part thriller as Beth and others race to find Cameron. It is part YA with both protagonists in their teens.

It is all good.

Featherstone’s pacing is terrific. As the plot develops, the action gets hotter and the stakes get higher. His protagonists, especially Beth, are delightful. Featherstone gives a nod toward the poor and working classes, but not in a way that targets all of the rich. Certainly some of the rich people are awful, but Beth is also helped in her cause by a wealthy partner. And there were some twists near the end that completely wrecked my mind-canon of how the story should go. I won’t spoil it for you, but don’t leave before the end of the show.

As a YA novel, it definitely leans toward mid to later aged teens. Not sure I would hand it to a 13-year old, but I think many 15-18 year old genre readers would find this as much fun as I did. (And I’m sure many younger readers could handle it but there are some mature themes and events.) Phill Featherstone does not write down to his audience. He encourages them to think big ideas and to wrestle with complex moral dilemmas and does so with a large helping of adventure and intrigue. 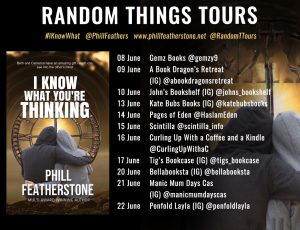 Our thanks to Anne Cater of Damp Pebbles Blog Tours for our copy of I Know What You’re Thinking, provided so we could take part on this blog tour. The opinions here are those of Scintilla. For other perspectives, check out the other bloggers on this tour.

One thought on “Blog Tour: I Know What You’re Thinking, Phill Featherstone”