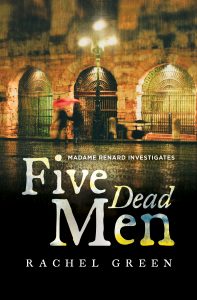 Margot Renard is the daughter of a judge and the widow of a detective. She now works as an advisor for another judge and has become her close friend and confidante. Sharp and bold, she has discovered a knack for getting to the bottom of mysteries, and her boss hands her a big one.

Several years before, excavators discovered an underground chamber. In that chamber were five bodies. Five men had been tortured, violently killed, then had their teeth and fingerprints removed. None of them were ever identified and no suspect was ever arrested. Judge Celia Devereaux would like Madame Renard to look into it for a very personal reason: the previous owner of the home is her cousin, and at one time the main suspect was her son, Pasqual.

With the help of a young police officer in the small town, Madame Renard begins looking into the crimes. Could it have been the judge’s relative? Was it the surly groundskeeper? Or someone else entirely? As the two women pursue leads from France into Spain, it becomes apparent that although the bodies had been unearthed, the killer was not ready for his or her secrets to be revealed. Madame Renard might chase the murderer but find herself caught in his trap.

Author Rachel Green has discovered a delightful protagonist for her mystery series. Margot Renard is smart, persistent, and sometimes prickly. She’s trying to stop smoking (unsuccessfully), she can drink most men under the table, and despite her fondness for swimming and long walks, her love of fine food shows itself on her hips. She hates to lose, even in a billiards game while trying to remain undercover. She is strong-willed, opinionated though usually tactful, still trying to discover who she is as a single woman without the love of her life by her side. And she is more than willing to stick her nose into places where others do not think it belongs.

Perhaps the thing I like best about Madame Renard is her willingness to lift up others. Alia Leon is the only police officer in her small provincial town. Her uniform is an ill-fitting hand-me-down from her father, the former police officer. Her mother was Moroccan, her biological father unknown when her parents adopted her. The mayor wants her giving out speeding tickets. She dreams of joining the French national police, but she is taking care of her father and feels she cannot leave. Margot sees Alia, a young woman of color trapped in a small town by obligations and duty, and recognizes her potential. Alia becomes a partner in the investigation, responsible for discovering many of the leads and central to the climax of the book. In a world where too many refuse to mentor others, too many look only to themselves, too many insist on seizing the credit due to others, having a protagonist who lifts up a younger woman is incredibly fulfilling.

Madame Renard is not the youngest investigator in current mystery series, but she definitely has enough stamina to keep going for many more novels. Only two books in, I can tell that Rachel Green is going to be among my “must read” authors for a while to come. 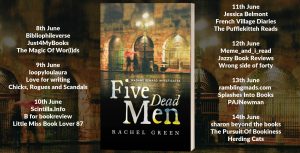 Our thanks to Rachel Gilbey of Rachel’s Random Resources Blog Tours for our copy of Five Dead Men, given so we could present our review during this blog tour. The opinions here are those of Scintilla. For other perspectives, check out the other bloggers on this tour.