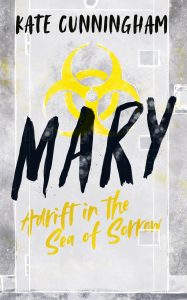 In 1869 Mary Mallon was born in Ireland. At the age of 15 she emigrated to the United States, where she worked as a cook for affluent families. Despite her skill in the kitchen, misfortune seemed to follow her. Other servants and family members of her employers became sick within weeks of her arrival. For several years, Mary fled house after house to escape the persistent plague. Eventually, though, the source of the plague was identified as Mary herself, a healthy carrier of the disease. Typhoid Mary, as she became known, ended up spending decades in quarantine and died while quarantined on an island.

The protagonist of Kate Cunningham’s Mary is being held captive in “the Facility.” A hermetically sealed scientific research laboratory, Mary spends her days being tested and prodded, poked and bled. Her only contact with other humans is when the technicians come into the room fully dressed in HazMat suits. Although Mary is about 16, she has intentionally been kept as a “blank” with no obvious intelligence or even sentience. She looks human. Her blood is red. As far as the scientists are concerned, though, she is a large lab rat.

Mary is a healthy carrier of the Red Plague, a disease that swept the world and decimated the population. Scientists are attempting to use her to create a vaccine against the plague. If they ever question their own actions, they quickly justify it in terms of the greater good.

Then, people start dying from the plague.

Cunningham wrote this book prior to COVID-19. Knowing this, it is eerily prescient about the types of human behavior that a plague engenders. Some go into denial. Some withdraw and go into isolation. Some take advantage of the new situation to reap incredible profits and gain unimaginable power with their wealth. The world built by Cunningham is terribly familiar to us in 2022.

As well as the vivid description of a post-pandemic society and the various ethical questions raised throughout the book, it is a very good read. The pace is solid, there are multiple surprises up to the very end, a little romance and redemption and reconciliation get tossed in. I really enjoyed it as a novel and I appreciated the challenge to consider these difficult questions. 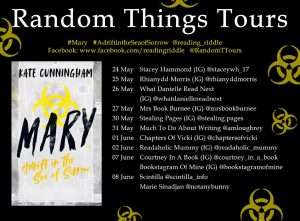 Our thanks to Anne Cater of Random Things Blog Tours for our copy of Mary, given so we could participate in this blog tour. The opinions here are solely those of Scintilla. For other perspectives on this novel, check out the other bloggers on this tour.