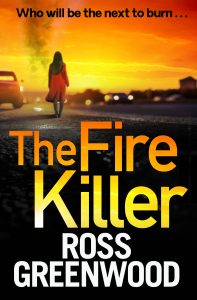 This book starts with a shocking chapter that puts the reader on alert that things are going to get wild. DI John Barton and his colleague Shawn Zander race to a house fire where two of their teammates are attempting to rescue a woman. Just as they arrive, an explosion rocks the house with both of their teammates inside.

The Fire Killer then goes back to the start of the investigation. A small trash fire outside a convenience store does not seem to be the sort of crime that would involve detectives. Barton and his team are called when the inside of the rubbish bin holds a badly charred body. With no identification and no reports of a missing person that matches the body, the detectives struggle to find the identity of the victim and any motive for the crime.

A lead begins to unravel the mystery. Having identified the victim, the team begins to look for suspects. Their challenge quickly becomes determining which of the odd characters they’ve identified might be the killer. They are also uncertain whether the fire was meant to kill or if the death was an unhappy coincidence of a drunk person choosing the wrong place and the wrong time to sleep it off.

So: was it the ex-boyfriend? The previous girlfriend of the ex-boyfriend? The local neighborhood pot grower? The acerbic old man or his teenaged grandson? The neighborhood tough guy? Or someone else? While they try to figure this out, another fire breaks out. Then a house fire, with an elderly woman inside who barely escapes when a stranger rescues her. The fires keep coming, the danger keeps growing, and the case gets larger and larger.

I really appreciate the occasional police procedural with a cop in a stable marriage. DI John Barton tries to be a good husband and a good father. It’s hard with his job, but he makes great effort to be there for his family as well as be good at his job. I am quite confident that being a cop puts enormous stress on relationships, and many fail (or fail to begin) because of that. However, some people are able to persevere through the challenges, and as an old married person (going on 36 years) it is delightful to see myself represented in a book.

Ross Greenwood kept his cards well hidden. Despite (or maybe because) of the chapters written in the killer’s own voice, I did not identify the killer until the very end. Even then Greenwood had a few more twists to play out. The plot is well paced, the action keeps coming, the voice of the killer is chilling, and the effects on the team are powerful. For mystery fans there is everything to love about this book. 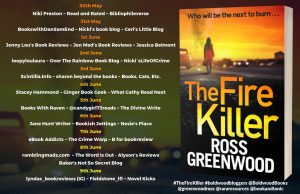 Our thanks to Rachel Gilbey of Rachel’s Random Resources for our copy of The Fire Killer, provided so we could participate in this blog tour. The opinions here are those of Scintilla. For other perspectives on this novel, check out the other bloggers on this tour.