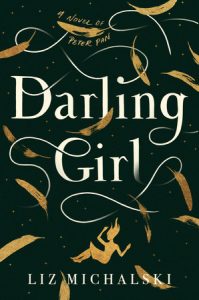 Holly Darling, daughter of Jane Darling, granddaughter of Wendy Darling, carried the weight of a famous name everywhere she went. Everyone knew about Peter Pan, the boy who never grew up, the boy who could fly. Everyone knew that Wendy had gone with him to Neverland, along with her brothers, had some great adventures, then returned home to be with their beloved parents.

Everyone knew that it was fiction, a modern-day fairy tale, no more real than Santa Claus or dragons.

Holly is a scientist and entrepreneur. She has built a cosmetics powerhouse creating lotions and makeup that almost magically helps people look younger. Hoping to leave family expectations and bad memories behind she has relocated to New York with her son. She also hopes to find a cure for him. Jack was severely injured in a car accident that left his twin brother and their father dead. It also left Holly with a permanent limp. Jack has made an extraordinary recovery but it is due to a secret formula only Holly knows, a formula that only has one source.

There are other secrets Holly is keeping. Like, the secret house she maintains in England. The secret nursing staff providing 24 hour care to the sole person who could legitimately call the place “home.” She is the biggest secret of all: Eden. Holly’s daughter has been in a coma for more than a decade. Few people know of her existence. And for Eden’s protection…for her own protection, Holly wants to keep it that way.

Until the day the phone call that Holly has been dreading comes. The lead nurse in charge of Eden’s care calls to tell Holly that Eden is missing. Gone without a trace. It’s almost as if she flew away.

Darling Girl is a clever reworking of the legendary Peter Pan story. It is a darker story, with flawed and complex characters living as best they can but making sometimes terrible mistakes in the process. Throughout, author Liz Michalski keeps our eyes focused on Holly. Holly loves her children, both of her children, with a ferocity and passion that many parents can understand. In her fear for them and her total commitment to keeping them safe from any harm, she sometimes becomes the source for their hurt. Jack feels smothered by her overprotectiveness and begins to rebel, doing thing that are not unusual for teenagers but could have greater consequences to him than he knows. Of course, he can’t know: Holly has not told him. She has kept her mother, her son, her friends completely in the dark. When finding Eden requires that she reveal the secrets she has kept for so long, the pressure becomes so great that we may fairly wonder whether Holly can bring herself to open up.

Fairy tales sometimes end with the banal statement, “And they lived happily ever after.” Life doesn’t really work that way, though, does it. After Wendy and her brothers returned, Michael fell from an upper story window and suffered a traumatic brain injury. Wendy’s daughter, Jane, longed for her entire life to meet Peter Pan, but never had. And as Holly’s story unfolds we see the toll that both the fairy tale and the reality behind it have taken on her.

Twists and turns abound. It is said that one should never meet their heroes. That may be even more true when those heroes are characters in a book. The two-dimensional page may hide a lot of darkness found in a three-dimensional person.

Our thanks to Emma Dollar from Wunderkind PR for bringing this book to our attention and inviting us to read and review it. She was kind enough to provide a copy for us with no promises that we would do anything more than look it over. She thought we might like it. She was right.