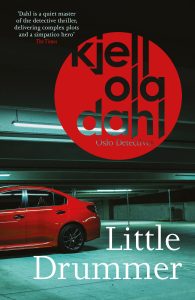 A journalist finds a young woman’s body slumped in a car. Dead from an apparent overdose, detective Gunnarstranda insists on a forensic autopsy. His misgivings are confirmed with the discovery of ether in the woman’s bloodstream. She was unconscious when she overdosed. In short, she was murdered.

Gunnarstranda and his partner, detective Frølich, begin digging deeper into the woman’s life. They discover that she had just started seeing a Kenyan graduate student/scientist who has himself disappeared. It’s hard to believe the two events are coincidental, but did the man kill her and flee or did he flee in fear of being killed by the same murderer? The trail leads from Oslo to Kenya and dangers exist in both countries, dangers that come very close to being deadly for those investigating the crimes.

Originally published in Norway, this new translation by Don Bartlett brings one of the leading lights of Nordic Noir to the attention of the English speaking world. Considered the “godfather” of Nordic Noir, Kjell Ola Dahl writes with an intensity that shines through even in translation. And, of course, great credit to the translator who has taken this gritty and intense novel and given it enough translation to bring it into this language and kept enough Norway in it to smell the fish.

Fish are actually a large part of the story. Dahl devotes a powerful section to the dilemma facing fishermen in Africa’s Lake Victoria. Once they survived almost entirely on their catch and were able to sell the extra to buy other necessities. Now, they work for international fishing conglomerates for poverty wages, not permitted to eat the fish that they catch. Due to the appetites of Western consumers, over fishing has led to the industry losing money and firing their workers, leaving them without even the pittance they were receiving. It is a nightmare scenario, found in countries around the world that have fallen victim to the rapacious nature of Western capitalism. Dahl writes about it with sensitivity and compassion, and successfully weaves it into the plot of the story without becoming preachy or pedantic.

Orenda publishing knows a thing or two about fishing as well. They cast their lines again and again into the lake of Nordic Noir, and time after time they reel in a winner. The only problem is they release so many great books that I can’t keep up. Not that they should slow down! That is definitely a “me” problem. 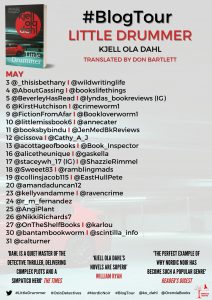 Our thanks to Anne Cater of Random Things Blog Tours for our copy of Little Drummer, given so we could participate in this blog tour. The opinions here are those of Scintilla alone. Check out the other bloggers on the tour for more perspectives on this novel.