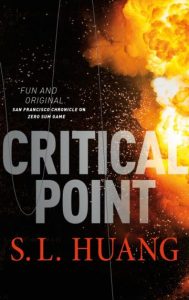 Cas Russell has an office. It has a desk. It has a door. It has her name on the door. She has an appointment with a potential client. The next step in her rejoining the world might even be getting a social security number.

OK, let’s not get carried away. A lady’s got to set some boundaries.

While waiting for the client to arrive, a teenage girl comes in. Her father has disappeared and she is worried. When Cas learns who the father is, she has her own flood of emotions. The girl’s father is one of her best friends, possibly her very best friend. He is the one who got her the office, and the desk, and the door, and the nameplate. She thought they knew each other quite well.

She did not know he had a daughter. Make that daughters. Actually, make that daughters and sons. He had an entire family, including an ex-husband, that he had never shared with her. Russell is worried about her friend, but she is also infuriated with him for keeping secrets.

She is only slightly less mad at him when she leaves her office with the girl and moments later it blows up.

Russell has faced down an international conspiracy led by telepaths and a local cabal made up of all Los Angeles’ worst criminals. The stakes have become very personal now. A bomber has kidnapped her friend, tried to kill her, and threatens to wreak havoc across the United States. Bombs exploding across the US is bad, but kidnapping her friend really sets her off. Besides, she wants him alive so she can beat him personally for not telling her about his family.

And she kind of liked her office before it turned to ash.

In many ways this is the best Cas Russell novel yet. None of the books before had explored family dynamics. Cas Russell was always essentially a lone wolf, working with others by necessity but seldom if ever by choice. She had no romantic attachments, no parents or children, no real connections other than to her longtime friend Rio and her often testy relationships with a small number of others. None of the other characters had relationships either (that we knew about).

Now we see a family at work. Children and their fathers. Ex-spouses trying to make things work in some way so the kids know they are loved. Teenagers and college students and young adults figuring out life–and trying to survive the attention of someone who does not mind killing them in order to make a point. All of this reveals new aspects of protagonist Russell. She is angry at being excluded. She is wistful and longing for relationships she does not have. She is drawn into the family before she realizes just how much she wants this. Yet, she is terrified that her past, her present, her tendency toward violence and the target she seems to wear on her back may be destructive to this family.

All I will say is that as this series progresses, the writing gets better, the plots get deeper, the characters grow immensely, and the action remains as fast-paced as you could ask for. S.L. Huang is getting better and better and we are lucky to be the beneficiaries of her creativity.