Book Review: The Library of the Unwritten, Hell’s Library Book 1, A. J. Hackwith 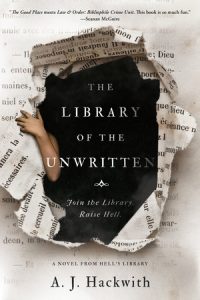 If you were a story, what would your “hell” be? Not a character in a story, but an actual story. In A.J. Hackwith’s brilliantly inventive novel, story hell would be to never get finished. You were brought to life by the imagination of a writer, only to be abandoned uncompleted as the writer moved on. Writer’s block, other more powerful stories, intrusions of life, untimely death. There are any number of reasons a story may be unfinished. But for the story itself, that’s hell.

So what happens to those stories? They get put into books and shelved–in Hell’s library. Staffed by Hell’s librarian.

Her name is Claire Hadley.

Stories do not want to be stuck in hell. Sometimes their characters come to life and go out into the world to find their authors, hoping to inspire them to finish their work. When this happens, Claire has to go back to earth and find those stories before they do some damage. An author should never meet her characters. It just never ends well.

There are so many moving parts within this novel that deserve attention. The entire world Hackwith has built is just incredible. The library is located in Hell, though it is well insulated from the heat (flames and paper, you know). The cast of characters includes a very new demon, a former muse, the hero of an unfinished book (who conveniently goes by the name of “Hero”), a disgraced demon (?!) who oversees the annex to the library devoted to arcane objects, a pair of heavenly angels…you get the idea. And some or all of our team travels from Hell to Valhalla to Earth to some obscure afterlifes that no longer accept newcomers (Crete? Egypt?). Many of these characters radically grow. We learn backstories on the young demon, on the muse, on the angel, and others.

Many of the great stories of the world could be described (at least by nonbelievers) as fantasies. Myths, legends, tales of dragons and djinn and heroes and villains. Often the details of the stories are less important than what the stories tell us about ourselves and how we see our place in the world as individuals and as groups. The Library of the Unwritten uses a framework of region and mythology and imagination to tell us a story of redemption. People make bad choices, sometimes horrifically bad choices. People can also make good choices. The opportunity is always there for a good person to make a bad choice. But the opportunity is equally available to bad people to make good choices. How that weighs out in a life is not for me to judge.

As far as this novel goes, however, it is brilliant and illuminating and thoroughly delightful.

Claire is described in the first chapter as someone who lives “by the firm moral philosophy that one could never have too many pockets, too many books, or too much tea.” Obviously such a practical person would appreciate the following Date Nut Cookies as a sweet treat along with a fine cup of tea and a new story, since these cookies are easy to put together using the stovetop. Many versions of this cookie are seen around the holidays and potluck gatherings because they don’t take up in-demand oven space.

These cookies are like fancy Rice Krispie treats.  My mother-in-law, Laurie Marvin, usually made these around Christmas; since I tend to make them around the holidays as well I use apple cider or coffee (to balance the sweet of the dates).  Although, I never saw my mother-in-law use anything but water, my husband says that she sometimes did a grown-up version with rum. I could see Claire and Brevity enjoying those in the aftermath of their adventures.

I stick of butter

Grated coconut (optional variation for coating instead of powdered sugar)

In a large nonstick pan, melt the butter over medium heat, then stir in dates, sugar, and liquid.  Use a wooden spoon to stir the mixture till the dates melt, collapse, and create a thick paste. If the dates seem very dry add more liquid.  Turn off the stove, switch to a heat proof spatula and fold in the vanilla and Rice Krispies.

Place half of the mixture on each of the two aluminum sheets and generously sprinkle with powder sugar.  Pull the sides up and round the hot mixture to form into a rough log. Chill in the refrigerator for about an hour or till cool enough to handle.

After 15 minutes, check the logs to see if the logs are cool enough to roll into the final form of a firm log 2 inches in diameter.  Don’t be shy about adding more sugar when rolling because it will look nicer when it is cut if there is a strong white border. Reroll the logs in aluminum foil. Chill till hard (usually a couple of hours).  Then unwrap, add powder sugar to any empty spots, and slice into ¼ inch rounds. Alternatively, a small cookie scoop well coated with oil can be used to form small balls which can be rolled in the powdered sugar or grated coconut flakes.