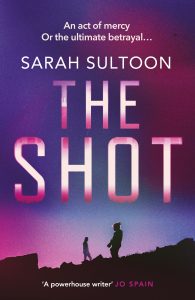 Samira is a young, ambitious staffer for a major television news channel in London. Kris is an award-winning photographer for the same station. In Sarah Sultoon’s newest book, The Shot, these two characters connect in ways that shape news coverage, international politics, and several individual lives.

When Kris is injured by a car bomb in Iraq, he returns home briefly but finds it impossible to settle. Although he has a wife and children, he is never truly settled unless he is on assignment, traveling to flashpoints and war zones around the world. Despite being told to take several months off to recover, Kris talks his way into a short assignment to Afghanistan. Since the network does not want him to travel alone so soon after his injury, they tap Samira to go with him on her first international assignment.

After they have finished their given task, Samira talks their U.S. Army minder into a small tour of Kabul. Through force of will and gifted communication, she talks her way into a woman’s hospital where they meet a very young woman, barely more than a girl, who had set herself on fire rather than continue to live with her Taliban husband. The interview and film are posted to the network’s website and a productive partnership launches.

Samira then accompanies Kris on his return to Baghdad, and later on a trip to Darfur. Each time the shots become more powerful, the interviews more poignant, the dangers more stark. Kris’s high profile goes even higher, and Samira’s career is rocketing. Nothing can go wrong–until it does.

Sarah Sultoon knows this life. Formerly with CNN, she has met those ambitious young staffers, those world-weary cameramen, the producers and directors and translators and assistants and all of the many people who make the 24-hour news cycle possible. She also knows the dangers and pitfalls of the 24-hour news. Not every story worth telling makes it onto the screen. Some stories are overhyped while others, arguably as important, get overlooked. It may be tempting to assume that “newsworthiness” determines what is covered and what is not. That is a factor but far from the only one.

In the competition for ratings, active wars grab more attention than quiet or older or more remote conflicts. This is especially true if those wars involve US or UK soldiers. Certainly the war in Darfur is no less traumatic for the civilians in Sudan than war anywhere else. But Darfur is in Africa, it is poor, it is far from international centers, it does not have a charismatic international figure at its head, it is hard to get reporters there and even harder to get footage from there. So, quietly, genocide continues, rape and torture and famine continue, and people continue to die far from the attention of cameras and viewers.

That is not to say that reporters or photographers or producers don’t want to draw attention to these other places. The Shot makes it clear that they do, sometimes desperately. There are many constituencies for the news, though, and many of those are more concerned about appealing to viewers (because viewers translate into ad revenue) than they are about people fighting in areas that western audiences are far removed from. Since those are the people who pay for the trips and the cameras and the guards and the translators and the trucks and so many other things, it becomes a self-sustaining cycle. Certain reports bring in more viewers, which brings in more money, which allows for more reporting so long as those additional reports continue to bring in viewers, etc. Wash, rinse, repeat.

There are so many aspects of this book that demand attention: mental health issues, poverty, refugees, torture, war, rape. I am facing on a very small scale some of the dilemma that faces a news producer: so many stories, so little time. I will regretfully leave those aspects behind with a completely inadequate summation: this book is brilliantly written, with very deep and disturbed characters and a very twisty plot that leaves you both satisfied and full of questions in the end. Sarah Sultoon is a terrific writer and The Shot helps cement that reputation. 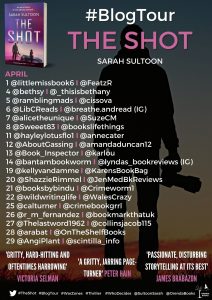 Our thanks to Anne Cater of Random Things Blog Tours for our copy of The Shot, given for our participation in this blog tour. The opinions here are solely those of Scintilla. For other views on this novel check out the other bloggers on this tour.

One thought on “Blog Tour: The Shot, Sarah Sultoon”