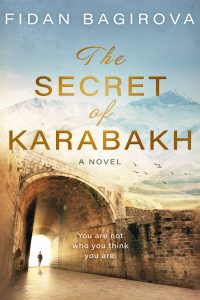 Not every work of fiction has a bibliography. If The Secret of Karabakh is any indicator, more of them should.

Alana Fulton is a brilliant archeology student. Educated at Stanford, Columbia, and now Oxford, she is already making her mark in the field. She also makes her mark in other ways. Daughter of a wealthy Los Angeles couple, she is the longtime girlfriend of a young movie star. Although her mother would like to see her do something that is more glamorous and less likely to ruin her skin and hair than digging in the dirt, Alana is very committed to her field, less committed to her boyfriend, and nearing the point where she will defend her dissertation and go out into the wild world of academia and ancient history.

When her room at Oxford is tossed by an intruder, Alana decides to go to London. In her absence, a chemical bomb is set off in her room. Many students are sickened, some critically, and the police want to have some difficult conversations with Alana. Others are also eager to find Alana–though their conversations will likely be short and end with a bang.

Alana has long had dreams of being a little girl in a far away land, then watching someone whom she loves but does not know being killed in front of her. As those dreams turn into memories and as her journey takes her from Great Britain to Switzerland to Azerbaijan and into the Armenian occupied territory of Karabakh, we learn that Alana does not just study history. She embodies it.

Fidan Bagirova gives us an adventure thriller that focuses on a part of the world often overlooked by the west. As the Soviet Union began to fall apart in the early 1990s, long simmering tensions between the regions of Azerbaijan and Armenia turned into a violent clash. Historically and ethnically the region of Nagorno-Karabakh was part of the culture and people who made up Azerbaijan. Russian, then Soviet, policies moved others into the region with the intent of diluting the ethnic population. When Azerbaijan and Armenia became independent countries, Armenia invaded and occupied Nagorno-Karabakh. Among the atrocities of this invasion was the mass murder of entire cities, a policy euphemistically known as “ethnic cleansing” and more directly called “genocide.” Despite very stern U.N. resolutions, they remain in occupation of the area to this day.

But the resolutions were very stern. That must give enormous comfort to the million or more displaced people who still cannot return to their ancestral homes.

I personally love thrillers that inform me about regions and events that I am not familiar with. I remember the invasion of Nagorno-Karabakh, but in the detached and distant way that someone on the other side of the planet with a general awareness of the news was aware of it. I knew it happened, I knew bad stuff was happening, but my kids were young and my job was difficult and my lawn needed mowed…. When tragedies happen, be they the invasion of Ukraine or the Rwandan or Yugoslavian genocides or an earthquake in Haiti or a tsunami in the Indian Ocean, most of us are a) not immediately affected by the calamity, and b) not in a position to do much. This is not altogether bad. If we were constantly paralyzed by events beyond our control, we could not survive. But it does make for some surreal interactions when we meet someone for whom the calamity was all too personal.

This is part of the beauty of fiction. My opportunities to meet people from this region are limited. Bagirova writes characters that meet me where I am. They do not judge my lack of information. They teach me. They encourage me. They share the pride and longing and heritage of a long history full of accomplishment. And they succeed in making me care about an area I have seldom thought about before. 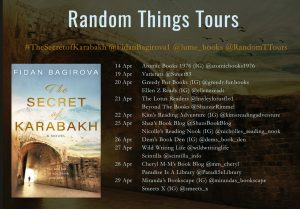 Our thanks to Anne Cater of Random Things Blog Tours for our copy of The Secret of Karabakh, provided for our participation in this blog tour. The opinions here are those of Scintilla. For other perspectives on this novel, check out the other bloggers on this tour.