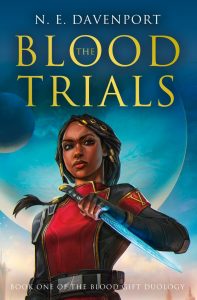 Ikenna, Selene, and Zayne are nearing the completion of their preliminary training. They have each spent eight years learning about warfare, weaponry, martial arts, and almost everything they need to become soldiers for the Republic. Selene and Zayne have decided to go on with their training and try to become Praetorians. These specialized soldiers are the Republic’s most valuable weapons, honed to a fine edge through a training program that no one quits. No one. Many will die, but no one walks out after pledging to be a Praetorian.

Ikenna, though, is done. Her grandfather, a leader in the Republic and a Praetorian, died three months ago. The medics are suggesting she take a year off to pull herself back together before she decides what to do. She has already decided though: she is going to spend the next year getting drunk and picking fights and desperately trying to forget the agony in her heart.

At the last minute, a visit from her grandfather’s dearest friend changes her mind. He shares with her the news that her grandfather did not die from a heart attack. He was murdered, possibly by one of the Praetorians in his own cohort. And Ineka finds a new mission: become a Praetorian and make those responsible pay.

Dangers are abundant both within and without the training. Within the training, some of her fellow classmates and some of the instructors are trying to kill her. And outside the walls, an old enemy has begun a new war of conquest hoping to overthrow the Republic.

The Blood Trials is one of those sweeping fantasies that takes your breath away. Ikenna is an amazing protagonist. First, she is as badass as they come. Trained in combat by the finest soldier in the Republic, her grandfather, she also has a very rare magical gift that helps her with speed, with healing, even with conjuring weapons out of blood. Since that gift is illegal and having it is a death sentence, Ikenna has long since learned to hide her abilities. What she has not learned is how and when to use them.

Second, Ikenna has a chip on her shoulder a mile high…and deservedly so. Not all friends are friends, not all enemies are enemies, but most of her classmates are united in one belief: no one with black skin should become a Praetorian. Ikenna has faced prejudice her entire life, but prejudice in the Blood Trials could lead to her sudden death. Plus, she is absolutely certain that her grandfather was killed by a Praetorian, one that he trusted. She is also certain that the order for his killing came from one of his rivals on the ruling tribunal. She intends to find and kill those responsible or die in the effort. Dying seems like the much more likely choice.

N.E. Davenport seamlessly blends sci fi weaponry with modern bigotry and ancient governance and terrifying magic. I will freely admit that I was not ready for this book to end. I had not guessed several of the key plot points, I was excited to see what Ineka and her friends would do next, I was shattered by the betrayals against her…and by her. This is a book that deserves to win awards, sell like crazy, and establish the author as a force in sci fi/fantasy. 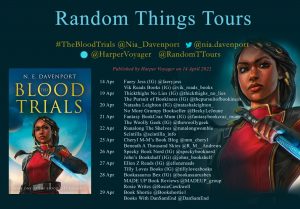 Our thanks to Anne Cater of Random Things Blog Tours for our copy of The Blood Trials, given so we could participate in this blog tour. The opinions here are solely those of Scintilla. For other perspectives on this book, check out the other bloggers on this tour.