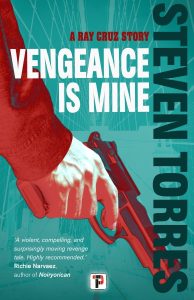 Thriller: Vengeance Is Mine, A Ray Cruz Story, Steven Torres

Ray Cruz has retired. After working as a low level enforcer for decades when he was not in jail, Ray wants nothing more than to appreciate his daughter Elena and his granddaughter Rosita. When Elena shows up at his Bronx apartment badly beaten and with her clothes torn, his first thought is that her husband William had hurt her. She assures him that it was not William but that she had been attacked by someone else. Someone she refuses to name.

Ray has not always been the best father but he is trying to make amends. He may not know parenting. He does know the street. He begins looking for the people who hurt his daughter. The police and FBI are looking as well, but Ray has no desire to see them locked up. He plans to hurt those who hurt his girl.

It would be very easy for this to tip over into the kind of melodramatic gangster reform story that we see on television or in movies. Surely Ray is really a good man who grew up with bad role models, but now he has aged into a more mature, less violent person.

That is partially true of this book, but only partially. Steven Torres fleshes out Ray (and to a lesser extent Elena) into fully formed characters. Ray has some regrets about choices he made. Those regrets would probably not keep him from making those same choices. He wishes he were a better father, a better husband. What’s done is done, what’s past is past, and he does not need anyone’s forgiveness, least of all his own. What he needs is to make sure that the Bronx is safe for his family. If this means killing anyone who hurt them, he’s OK with that. Perhaps he wasn’t the greatest father, but fathers protect their children and he is an expert in protection.

Having briefly lived in part of NYC, I loved the descriptions of the streets, the businesses, the neighborhoods. Most of the characters have ties to Puerto Rico, but they are far from stereotypical. Certainly Ray and many of the others he encounters are violent and not intent on keeping the law. But Elena is a professional in a law firm with a loving family at home. There are teachers and business owners, police officers and criminals. That is part of the music of New York City. It’s wild and it’s dangerous and it’s challenging and it’s amazing. I will probably never get to live there again, but I will never stop missing it and thinking of my short sojourn there. 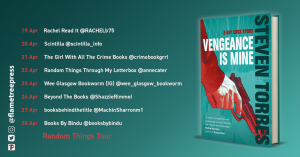 Our thanks to Anne Cater of Random Things Blog Tours for our copy of Vengeance Is Mine, provided so we could participate in this tour. The opinions here are solely those of Scintilla. For other perspectives on this book, check out the other bloggers on this tour.