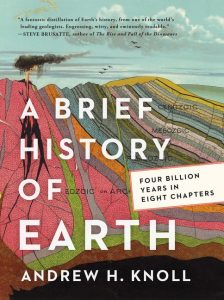 The subtitle of A Brief History of Earth is, I think, a wink and a chuckle at the hubris involved in writing this book. That subtitle is Four Billion Years in Eight Chapters. Andrew H. Knoll may take his subject very seriously, but he does not take himself too seriously. He freely acknowledges that there really is no way to encapsulate the history of the earth in any book or even in any series of books. Whether the book is eight chapters or eight hundred chapters, capturing four billion years and doing it justice simply is not possible.

These eight chapters, though, do what they can. Knoll is a special writer. Obviously a brilliant scientist, he is a professor of Natural History at Harvard, for two decades was part of the science team behind the Mars rover project, and is the winner of multiple awards. This book is not written for, or at least not exclusively for, other scientists. It is the kind of science those of us who are long removed from high school and college can handle. There are occasional scientific terms thrown in, quite translatable in their context, but this book is for the enthusiast and not the expert.

Earth is (obviously) unique in the solar system in many ways. (I realize that is essentially saying water is wet–which is one of those unique things about Earth–but please bear with me.) An oxygen rich atmosphere. Liquid water. Life itself. No other planets in this solar system have even one of those characteristics. No planet discovered in other solar systems shows similar features, though it’s still very early days in that exploration. But major questions remain as to how our planet turned out this way. Why is Earth different? What differentiates us from rocky balls orbiting this sun or any other?

Eight chapters (or eight hundred) will not explain all of it. But Knoll does give us an overview. Our orbit allows for the presence of liquid water. Our moon (likely itself a product of an impact with an asteroid or other moderately sized space rock) helps prevent most other space objects from making impact. Of the arguably six great extinctions wiping most life off the planet, only one is apparently the result of a terrible impact and even that one had at least contributing factors already affecting life on the planet. Life began before our atmosphere was oxygen rich. In fact, life itself changed the chemistry of the air and water, removing carbon dioxide and adding oxygen. That change precipitated one of those great extinctions, as life that could not handle oxygen died and new species took millions of years to replace them.

Knoll takes us around the world to examine rocks and fossils, plants and animals, geologic features and chemical footprints. We find fossilized shells on the tops of mountains which were formerly seabeds. We travel on the tectonic plates that subtly shift the configuration of lands and seas–separating Europe from North America by a measurable amount every year. We learn how the planet has sequestered carbon to affect our climate and our atmospheric chemistry–and how human activity is releasing that carbon again in unprecedented ways, undoing the work of millennia every single day.

Unlike a novel, we don’t know the ending of earth’s history. Eventually, given a few more billion years, the sun will expand and swallow the planet. Before that happens, though, there will be a lot more to write about. Will anyone be here to write that history? Will humanity have spread to other planets, other stars? Or will we be victims of our own anthropogenic extinction, caused by our own alterations to earth’s chemistry and characteristics? We’ll have to wait for the future to show us. It likely won’t take another four billion years.