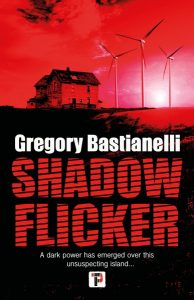 Those were not words spoken in the novel Shadow Flicker by Gregory Bastianelli. They certainly could have been, though.

Oscar Basaran is an insurance investigator. His company’s client is being sued for causing harm to some islanders with windmills. On the plus side, the windmills are producing clean power for not only the island but also some of mainland Maine. But people living in the shadow of the windmills are reporting health problems, trouble sleeping through the noise, and strange behavior by animals.

Basaran travels to the island and interviews the neighbors who filed the complaint. An elderly couple has found that their cows are no longer producing much milk. The milk they are producing tastes odd, too. Another family is worried about an aged father who lives with them. He is showing sudden signs of dementia, including eating dandelions and making wine out of seaweed. A third family lost a child the year before. Drowning is suspected but no body was ever found. Between the grief and the constant headaches generated by the windmills, the husband cannot take it any more and moves into the only town on the island.

Taken individually any of these could be easily dismissed. If some chemical got onto the farmer’s field it could affect the quality of the milk. Elderly people do get dementia. Grief does tear families apart. It also can have physical symptoms.There are some other unanswered questions, but the investigation does not seem to be revealing anything that could be a liability issue for the company.

Still, something strange is going on. Seagulls sometimes flock over the windmills and seem to dance through the air, almost as if they are dodging the shadows being cast. Almost everyone, even Basaran, is deeply affected by the shifting shadows, the “shadow flicker,” which covers the area every morning. The sound is not terribly loud, but it is constant and intense and affects both sleep and concentration. Strangest of all, sometimes in the flicker a small boy appears, one who is the perfect likeness of the child who drowned the year before.

Shadow Flicker is a slow burning story where the temperature rises with each chapter. More and more of the characters’ backstories get revealed as the novel develops. The child whose father was not his father. The loving spouse who was busily loving another person’s spouse. The economic pressure facing all of the families. Between infidelity and poverty, who has time to deal with an apparition?

This is an island of secrets. Secret lives. Secret loves. Secret experiments. Before he realizes it, Basaran is caught in the web of all of these secrets. Getting out of that web may prove to be impossible. 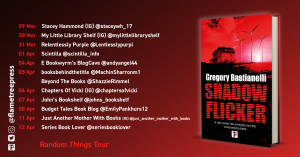 Our thanks to Anne Cater of Random Things Blog Tours for our copy of Shadow Flicker, provided so we could give an honest opinion as part of this blog tour. The opinions here are solely those of Scintilla. For other perspectives on this book, check out the other bloggers on this tour.