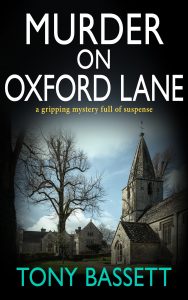 DCI Gavin Roscoe has reached middle-age with a loving family, a good job, and a solid team. He is a little worried about his young new sergeant, 25-year old Sunita Roy. She has earned her promotion, but she is still very young and very new.

Their first case together involves a missing real estate tycoon. Harry Bowers was last seen on his way to choir practice at his church, a practice he never attended. Nor did he return home. After a full week, his wife finally reported him as missing.

While they are searching for Bowers, Roy has to deal with some personal issues. An ex-boyfriend has begun stalking her, sending her dozens of texts, calling her throughout the day, even showing up at her home. Roy’s roommate is alarmed and insists that she speak to DCI Roscoe about it. But she is concerned that it will give him a bad impression of her.

Murder on Oxford Lane is a delight in every way. One of my pet peeves about police procedurals in both books and television is that very few of the detectives are normal people with normal lives. Tony Bassett has filled this book with ordinary characters, and I mean that in the best possible way. Sure, the coroner is a bit quirky. He is also overweight, friendly, and quick with a joke. Bowers loves his wife, loves his kids, and they love him as well. His wife is a full partner with her own job. She supports him in his work but is quite willing to take a stand when he gets too involved in the job and neglects his family. Roy has issues with her parents and obviously the ex-boyfriend, but her roommate and she are good friends and she gets along well with her sister and her cousin. Other members of the team are rumpled or flirtatious or out of shape or other descriptions that could fit right into a description of a normal workplace.

So many mysteries rely on some kind of uber-detective, a new Sherlock Holmes complete with closets full of skeletons. The ensembles in many novels are so full of individuals that it is hard to understand how they could ever work as a team. And few of them have personal relationships outside of work that provide any sense of stability or respite. Bassett’s team relies on dogged police work, collaboration and trust, attention to detail, and mastering the basics. For this reader, that makes much better reading and a much better story. 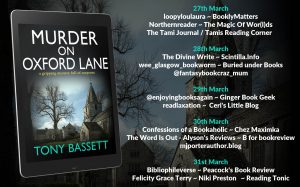 Our thanks to Rachel Gilbey of Rachel’s Random Resources Blog Tours for our copy of Murder on Oxford Lane, provided so we could participate in this blog tour. The opinions here are solely those of Scintilla. For other perspectives on this book, check out the other bloggers on this tour.