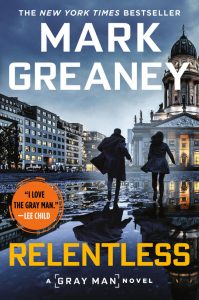 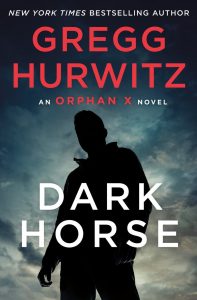 For years I have been under the spell of certain thriller writers. David Baldacci is one. Two others are Mark Greaney and Gregg Hurwitz. Any time they publish a new book I try to get it as soon as I can, I put it on the top of my TBR pile, I read it from cover to cover (sometimes staying up WAY past my bedtime) and I hate to finish it knowing I have to wait for the next one to come.

Both Greaney and Hurwitz have been writing for a long time. Both of them were successful writers before beginning the series that keeps me wanting more and more. Greaney’s “Gray Man” and Hurwitz’ “Orphan X” both pull me in and charge me up and I cannot get enough of either of them.

Relentless is the tenth novel in the “Gray Man” series (which now has 11 books so I’ve actually fallen behind–a fact to be remedied as soon as possible). Court Gentry, once a CIA operative, formerly a contract assassin who only killed “bad guys,” and now working off-books for the CIA, is recovering from serious injuries suffered during his last mission. However, his friend, code named Romantic, has been captured and is being held in Venezuela. Court, codenamed Violator, is sent to complete Romantic’s mission: find out what a dead man knows. The dead man, who is not so dead, was a CIA computer programmer who faked his death and disappeared. The CIA wants to know why he did this, what he’s been up to since he “died,” and who may have access to the top secret technology he developed. Court’s mission does NOT include rescuing his friend.

Unfortunately there are others searching for this man and they don’t want his information. They want to make sure he cannot share that information with anyone else. And before long the man is truly dead, Court is reinjured, and the only clue he could get was the picture of a mysterious operative working in Washington, D.C.

Meanwhile, Court’s love interest, former Russian spy and current off-book CIA asset Zoya Zakharova, is in Paris trying to infiltrate an international group that specializes in espionage. She has introduced herself as Stephanie Arthur, but quickly learns that her erstwhile employers know exactly who she is (though they don’t know she is now working for the CIA). However, if her employers know who she is, how long will it take for her Russian enemies to find her and try to kill her?

Parts of the novel essentially plot their own course. Of course, Court goes to Paris rather than back to the hospital. Of course he rescues Zoya. Of course she goes back to Venezuela to rescue their friend. Of course the three of them end up in Paris together fighting an international conspiracy to attack the west and destroy democracy. The beauty of Gray Man thrillers is not where they end up, but how they get there.

When we left Orphan X, aka Evan Smoak, in the last novel his apartment was being destroyed by rocket fire from AI controlled drones. In a scene that is, umm, not realistic, Smoak grabs the parachute he had previously stashed, puts it on as he is falling, and pulls the ripcord just in time to prevent serious injury. Now, several months later, his apartment has nearly been rebuilt and he is called again to serve as the “Nowhere Man,” a freelancer who helps people who have no other options.

This time the call is from a businessman whose business is quite far from legitimate. The man’s daughter has been kidnapped by a drug cartel. She is being held in a seemingly impenetrable fortress in Mexico. There have been no demands, no contact, no word on whether she is alive or dead. All Evan has to do is get into the compound, rescue the girl, and get out again alive, facing an army of drug smugglers with no compunction about killing anyone at any time. Oh, and his love interest Mia would like for him to meet her brother, so can he do dinner next week?

I will freely admit, as much as I love both of these series, they are not going to win their authors a Nobel Prize for Literature. I doubt either of the men really cares about that. Their royalty checks can compensate for any number of literary awards. What they both do care about, passionately, is telling an exciting story.

Court Gentry and Evan Smoak are both quintessentially 21st Century American heroes. They have every-man looks. They are of course extraordinarily fit, but they are not physical freaks. Both can get injured, both can take a punch (or a blade, or a bullet, or…), both can be effective when hurt. They are ruthless toward enemies but tender toward children and innocents. They are both highly trained former CIA officers, they have both been hunted by their former employer and colleagues, and they are both committed to a moral code that seems quite opaque to others.

However, both of these men are able to be vulnerable. Smoak is falling, hard, for his neighbor Mia and her son Peter. Gentry is sorting out his feelings for Zakharova (and she for him), but each has allowed the other to get into their hearts. They may have no compunctions about slitting a drug dealer’s throat or shooting a terrorist, but they will protect the innocent even when it threatens their own lives or missions.

Why do I like them? Both series are exciting. Fun. Violent. Tender. Both heroes are stronger than I ever was, smarter than I ever could be, decisive and committed and solid. I probably would never have wanted to become an international assassin. Probably. Regardless, that opportunity never presented itself. But I have always wanted to be a man of principles, a man who could be depended on, a man who stood up against injustice, a man who earned respect from those who mattered to him and did not care what others thought of him. I think a lot of men like to put themselves in these characters’ shoes. A lot of women might as well; or they may be drawn to the kickass characters of Zoya or Mia or other women in these books. We can’t all kill evildoers or protect democracy or dent the drug trade. We can all try to be better people ourselves.

If that’s all I get from these books, I’ll take it.