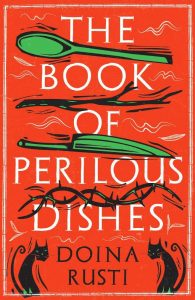 In 1798, fourteen year old Pâtca is sent to Bucharest. Although she has been initiated into various occult rites, she has not truly experienced the power she believes she has. Hoping her uncle, Cuviosu Zăval, can help her, she goes to his shop to find him and a book of magical recipes, The Book of Perilous Dishes. Foods prepared according to these recipes can induce unending hysterical laughter, forgetfulness, and many other magical outcomes. Rather than finding a mentor, though, Pâtca finds that her uncle has been murdered.

A gifted slave chef was recently taken from his wealthy matron by the local prince. Pâtca soon realizes that although the chef is indeed talented, his talents are being enhanced by recipes from the perilous dishes. Trying to mitigate the damage, Pâtca intervenes with little effect. The prince, indeed, the entire city, come under the sway of both the powerful tastes and the exotic effects of the recipes.

What follows is a whirlwind of events, most in 1798 and others 30 years later, that reveal both the powers and the limits to those powers of Pâtca and her family. The young Pâtca is firmly of the belief that the occult powers and the being that grants those powers are real. Very, very real. But she is too young and untrained to use them with any significant effect herself. What results for much of the book is a bit of uncertainty, at least for this reader. Is Pâtca an untrained practitioner? Or is she a bit out of touch with reality? Certainly her behavior is often quite bizarre. Upon finding her uncle’s body, she stuffs him into a water barrel and begins to move it through town–but then she gets distracted and leaves the barrel in the public square. She goes on trial for his murder. Her defense is barely coherent; still, somehow, she is not imprisoned. She thinks she has murdered someone (not her uncle), then sees his “ghost.”

Doina Rusti has a heroine who is as confused and distractible as most 14-year olds are. She is at times brilliant and at times flighty. Her emotions whirl uncontrollably. She loves and hates and loves again. She rushes to judgment then realizes she was wrong. Or was she? James Christian Brown’s translation captures, I think, the spirit of Rusti’s novel. He does not try to force it into a more American/English format. He allows it to breathe, to carry the Eastern European heart behind it. Pâtca is very identifiable and relatable as a young adult, but is also quite different in her perspective than a teenager in other places might be. Then again, I have never met an immature 18th Century occultist.

Whether Pâtca is an ordinary teenager with a vivid imagination or someone much more powerful is not immediately obvious. What is immediately obvious is that she is an intelligent and strong willed young woman, highly emotional and sometimes prone to impulsive decisions, but intriguing and beguiling all the same. There is magic in this book, and not all of it is found in the recipes. 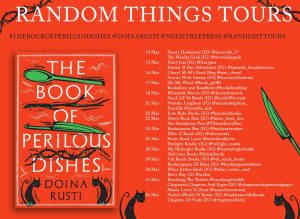 Our thanks to Anne Cater of Random Things Blog Tours for our copy of The Book of Perilous Dishes, provided for our honest review as part of this blog tour. The opinions here are solely those of Scintilla. For other perspectives on this novel, check out the other bloggers on this tour.