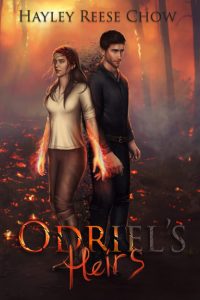 Kaia Dashul wants to be an ordinary girl. She wants to go to the village school. She wants to dance during the village festivals. Kaia, however, is far from ordinary. She is the firstborn of the Dragon Heir, one of three who carry the magical powers of their direct ancestors. The firstborn child of the Dragon Heir, the Shadow Heir, and the Time Heir each receive magical power from their gifted parent. When they grow up, or that parent dies, they become the carrier of the magic to the next generation.

The Dragon Heir’s gift is fire. Her father, the current Dragon Heir, is away on a mission to confront a necromancer who is raising an army of dead soldiers. Kaia is stuck at home with her very protective mother, her bitterly jealous twin brother (younger by six minutes), and her other siblings. Her constant companion, a “ragehound” named Gus, is really her only friend.

When Kaia sneaks out to go to the festival where children her age are introduced to the community as new adults, her desire is to watch. Maybe dance. With luck, no one will recognize her.

Then, the undead attack.

Kaia is forced to use her power to burn the attacking forces. Unable to yet control her gift, she does stop the attack. She also burns part of the village to the ground. The villagers are angrier about her actions than they were about the attack, and Kaia’s mother determines to flee with her children.

Kaia decides to go in another direction. She has learned where their father was a few weeks earlier. She decides to go find him, help him if she can, and learn from him how to control her power.

This inauspicious start to Kaia’s adventure is an extraordinary start to ours as readers. Kaia is a wonderfully written protagonist. Smart and foolish, joyful and moody, decisive and confused, strong and vulnerable, she is…well, she is a teenager. A teenager with all of the delightful and exasperating characteristics of a teenager. (I’ve raised three boys through those years–not entirely the same, but definite similarities.) Kaia may have incredible power but it is housed in a very typical package. Many other teenagers are smart, talented, mature beyond their years, and able to do more than they imagine. The only thing setting Kaia apart from them is her ability to start fires.

I love fantasies like this. This may be a world with magic, a world with undead warriors and living gods and cursed men forced to live as talking cats and creatures never seen in our earth. But fundamentally, Kaia and the other heirs are ordinary people dropped into this extraordinary world. She may be able to burn armies down, but she struggles to control her emotions. She might save the world. Hopefully she is also able to find herself.

Extraordinary determination, exceptional passion, committed to saving the world and determined to dance her heart out on weekends. With the youth movement seeking to combat climate change working to save our world, we see a lot of Kaia’s stepping up around us.

Odriel’s Heirs is definitely one of those YA fantasies that captures an adult’s heart. I adore Kaia! Her world is amazing, her powers are special, her character is very relatable, and her story is not done. I hope I get the chance to read the second book in this series soon. 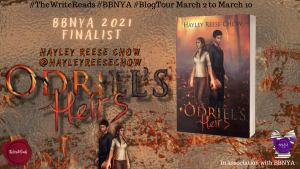 Our thanks to The Write Reads Blog Tours for our copy of Odriel’s Heirs given for our participation in the blog tour celebrating the BBNYA top ten winners. The opinions here are solely those of Scintilla. For other perspectives, do check out the other bloggers on this tour.