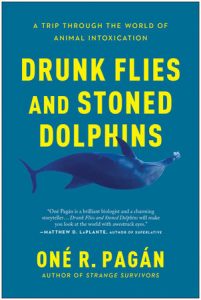 Please tell me I’m not the only person who sometimes picks up a random book by an author I’ve never heard of because the title catches my eye! Drunk Flies and Stoned Dolphins. Seriously? That title alone is worth the price of the book. Happily, the content lived up to the promise on the cover.

Pagan promises early in the book to write as though we were just having a conversation and he does just that. What a fun conversation it is! A little bit of the history of pharmacology and a lot of research into the effects of various substances on our animal friends, Pagan does not cast judgment on animals (or humans) that use drugs. He tells the stories and let’s the reader judge.

Sometimes the effects come from direct experimentation. Spiders on drugs make very different webs than those without chemical influencers. Spiders may not trip out on LSD, but their webs are awfully trippy after exposure to the drug. Fruit flies given alcohol have trouble, well, flying. (I don’t think they make a breathalyzer that small, so the details rely on observation.) Dogs are known to get drunk, though unlike humans they only tend to do so once and then avoid alcohol altogether. And cats on catnip have strong reactions, whether that cat is the tabby living in your house or the jaguar prowling in the jungle.

Speaking of prowling the jungle, exposure to chemicals is hardly just done in (hopefully) controlled experiments. Wild dolphins have been observed “playing” with a poisonous puffer fish. Some speculate that the fish’s poison has some kind of mental or physical effect on the dolphins that they enjoy. Elephants have rampaged after getting drunk (usually from alcohol that humans did not properly secure). Other animals seem instinctively to seek medicinal plants to ease stomach distress, as dogs do with grass. Whether instinctive or intentional or accidental, many animals are exposed to (or seek out) plants, fungi, animals, and minerals that have effects beyond merely nutritional.

Pagan tells stories the way an entertaining uncle might do at Thanksgiving. He is charming and smart, never talking down to his audience but introducing concepts through stories in a way that is both informative and enjoyable. Deeply researched, the footnotes and bibliography give readers the opportunity to take further steps into this area of science. The history is fascinating, the science is revealing, and the writing is both humorous and thoughtful. If the reader’s interest is more limited, Drunk Flies and Stoned Dolphins is still a terrific introduction to zoological pharmacology (essentially, drugs used by animals) that is accessible and delightful. Fans of animals, people with general interest in the sciences, even middle grade and young adult readers will all find much to enjoy in this book.