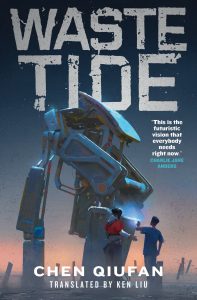 When I was younger I often stayed up all night to read a book. Now, though, I need my sleep. I no longer have the resilience to read into the wee hours of the morning and then go about my day with energy and elan.

Chen Qiufan and Ken Liu have no respect for my age. Instead, this author and translator worked hard to sabotage a perfectly good night that should have been devoted to sleep. Waste Tide kept me up much of the night, moving from chapter to chapter, racing to the end of the story. I was quite exhausted the next day–and intensely grateful for the gift of a magical book.

Mimi was brought to Silicon Isle under false pretenses. Promised a good job and a better life than she could have in her rural Chinese village, she instead picks through the scrap waste of recycled electronics and lives in a shack. She is at the mercy of ruthless gangs who control the island and the people living there, along with many thousands of others who were lured by the same lies and promises.

American Scott Brandle has come to Silicon Isle to negotiate with the government–and the gang leaders–an opportunity for his company to do business. Chen Kaizong is his interpreter. Born on Silicon Isle, his family moved to the states when he was a teenager. He has come to interpret for his boss. He has also come for more personal reasons: to rediscover his family and his roots in this place he only vaguely remembered.

Author Chen Qiufan has made a near-future world that is all too believable. Silicon Isle is poisoned. Polluted by the same chemicals that fill their only industry, the land, water, and nearby ocean are filled with the effluent of computers, cell phones, and other technological devices that have been discarded by consumers around the world. There is a living to be made pulling reusable and recyclable items from the detritus. But it is no way to make a life. Workers are underpaid, overworked, exposed to harm, forced to live in unsafe and unsanitary conditions, and generally die early. A few manage to save enough money to return to China and do something else: start a business, purchase some land, create a new life. Most do not.

Chen also masterfully reveals secrets and twists piece by piece. Key pieces of the past change our perspectives on several characters. Characters are also nuanced and complex. A ruthless gang leader is also a loving father and devout Buddhist. An apparent environmentalist has a much different hidden agenda. Chen’s characters are fighting for survival against each other and against a harsh world that uses their work but ignores their plight.

Waste Tide is a vividly imagined book with complex characters, a flair for language (I can’t speak to the Chinese original but Ken Liu’s translation is almost lyrical at times), and a dark future that may be closer than we care to admit. It is a brilliant sci-fi that transcends the label “genre fiction.”