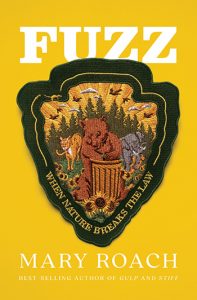 I was unaware that the durian fruit can be deadly. Known for its appalling odor (I’ve heard, though I’ve never personally confirmed, that it smells like a rotting corpse), the durian is a prized fruit by many people and a despised fruit by many more. Apparently, though, it can also kill. The durian has a hard exterior, is rather large, and is covered with spiky protuberances. When it falls from its tree onto an unsuspecting person’s head, the results can be fatal.

I also did not know that there have been no confirmed killings by wolves in North America. Given the glee with which they were hunted and the nightmare-inducing fairy tales my ancestors carried from Europe, I had somehow assumed that at some point wolves were an absolute menace to mankind. They do go after our livestock (and occasionally our pets), but they avoid people and at least on this continent have never killed anyone in recorded history. The same cannot be said of bears or mountain lions, though.

Fuzz: When Nature Breaks the Law is a fun and fascinating book full of information. Deadly Douglas firs. Drunk elephants. Attacking monkeys. Violent gulls. Mary Roach has been described as the funniest science writer. I am not sure where you pick up that award, but she certainly makes her case for it in this book.

Divided into two parts, which might be described as “felonies” and “misdemeanors,” Fuzz looks at efforts to prevent human and animal conflicts from happening in the first place. Usually these efforts are defeated by humans. Aspen, Colorado has an ordinance requiring restaurants to dispose of trash in bear-proof containers. Those containers only work when the lid is secured and locked. That, however, is inconvenient for the humans, which is quite convenient for the bears. Hence, walk into a dark alley on an Aspen summer evening and you are more likely to be mauled than to be mugged. (Not that either is very likely as bears like to avoid humans even more than humans like to avoid bears.) Efforts to genetically modify mice to only sire males, attempts to frighten gulls away with lasers, and spraying langur urine on roofs to discourage macaques are just a few of the proposals that have been or are being tried. Some are unproven. Others are minimally and temporarily beneficial.

At least they have slightly more scientific backing than the efforts of lawmakers in previous centuries who tried to legally banish caterpillars from trespassing, excommunicated bears, tried a pig for murder (they kept the accused pig in jail until the trial), and shoved eviction notices down rat holes. I personally assume the rats appreciated the nesting material.

Throughout the book, despite the humor, there is a serious reminder that this is a serious problem for both humans and animals. In the US, animals that attack humans are typically killed. Sometimes the wrong animal is killed before the right one is found. Bears that break into homes more than once often face the same fate. In places that try to avoid killing animals (India is one such place) the elephants and leopards that endanger humans may repeat their “crimes” numerous times. Of course, sometimes the animals get a bad rap. Indian headlines screamed about a man being stoned by monkeys. He had fallen asleep at the base of a stone wall which a troop of monkeys inadvertently knocked down on him. The finer point of intent was undoubtedly irrelevant to the victim, but it did sell a number of papers.

Relocating the animals seems like a good idea, but usually it is just relocating the problem to someone else’s town, or dropping the animal into a strange environment with other animals that see it as an invader, or completely futile as when the US Navy relocated albatrosses to far off islands from their Midway nesting grounds. Albatrosses can fly thousands of miles and they are hard-wired to return to the place of their birth. There is literally no spot in the Pacific that is too far for them to return home.

Fuzz is delightful, thoughtful, and sometimes sobering. It also drives home a truth that all of us know but prefer to ignore: the most dangerous animal of all is us.