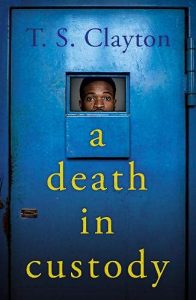 The expression, “I’d love to be a fly on the wall in that room!” lightheartedly expresses what many of us feel from time to time. In A Death in Custody we get to be a very busy fly, moving from room to room to room as a “ripped from the headlines” story unfolds.

Delroy is a low level street criminal. Very low level. Occasional marijuana user, arrested for some very minor and non-violent crimes, he gets caught selling crack to an undercover policeman in Brixford, a neighborhood in London. Although he pleads innocence, the video shows the deal going down and he quickly realizes that his options are very limited. Trying to buy his freedom, he offers to provide information about a criminal with the street name of “Ice.” He will only provide that information, though, to a high ranking officer.

That evening, Delroy is killed in his cell. The only other person in the cell with him is a detective who claims it was self defense.

The next day, a man shows up at the local newspaper office. He has clearly been drinking but he tells a sobering story. While in jail for “drunk and disorderly conduct” (he proclaims that he was drunk but not disorderly–you can’t blame a man for wanting to sing, can you?), he heard a man being killed. The reporter calls the police station for information, and they confirm that a man was killed and an investigation is underway.

Our little fly-spy cam gets very busy. The reporter. The detective. The outside investigator. The lawyer for Delroy’s family. The lawyers for the Crown Prosecutor. A corrupt private investigator. A youth worker. The reporter’s mother. At turns our fly-spy follows each of them, not only listening to their conversations but revealing their inner thoughts. The result is a chilling, compelling, riveting, and I fear realistic look at the realities of people of color in many places (although it is set in London it certainly feels like it could have been set in dozens of cities in the US). The police department is not set on covering things up, but neither are they enthusiastic to investigate one of their own–even if he is not well liked or respected. The Crown Prosecutor’s office does not want to cover anything up, but they work in tandem with the police and are also not eager to do anything to harm that relationship. The detective involved actually does want to keep certain things buried, and takes steps that cross legal lines in order to keep his secrets. Meanwhile, black residents are threatened and bullied and harassed on a daily basis. Driving While Black is a non-statutory crime that results in motorists being pulled over on the slimmest of pretexts. Such things lead to simmering resentment that occasionally boils over into violent unrest.

Clayton also reveals some of the things we white people say to convince ourselves we are not racist. It’s not about his race, but their “brown” children won’t fit in anywhere. I can’t be racist, I’m dating a black person. He’s not racist, he treats everyone badly. We may give ourselves some false comfort with these thoughts but we can’t effect real change without an honest accounting of the lies we tell ourselves.

In the US, February is Black History Month. Although this is a British book set in London, it speaks very directly to the challenges faced by black citizens in majority white countries. No American should read this book and think, “It couldn’t happen like that here.” If George Floyd has taught us anything, it is that it not only can happen here. It does.

Brutally honest, an insider’s perspective from a former barrister, riveting and often disturbing, Clayton has written a book that plowed deeply into my heart and mind. I cannot recommend this book enough. 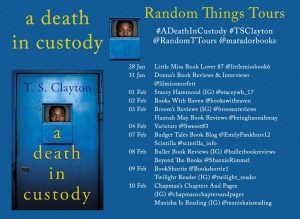 Our thanks to Anne Cater of Random Things Blog Tours for our copy of A Death in Custody, provided for our review as part of this tour. The opinions here are solely those of Scintilla. For other perspectives on this book, check out the other bloggers on this tour.

One thought on “Blog Tour: A Death in Custody, T.S. Clayton”