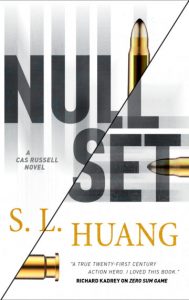 Author S.L. Huang has a rather different biography than your typical writer. She has a degree in mathematics from M.I.T. Afterward, she moved to Los Angeles where she worked as a stuntwoman and an armorer. Now, she writes books about a kickass mathematical genius with expertise in martial arts and firearms. Since they are technical science fiction, I suppose they are not actually autobiographical.

Cas Russell nearly lost her life and her mind to the telepaths she fought in the first novel, Zero Sum Game. Despite her hatred of their methods, she finds herself identifying with their goals: reducing crime in the world. Cas, along with her friends, come up with a plan that they think might work in Los Angeles: create a cell phone app and empower it from microsites strategically planted (at mathematically defined optimal points) throughout the city. This app would work through the network to prevent people from getting caught up in a mob mentality. Groupthink often leads to crime, especially violent crime. Gang members want to prove themselves to their bosses. Family feuds escalate tensions between individuals. If some of these brainwaves can be calmed or diverted electronically, the end result might be a significant drop in crime.

Indeed, it does work.

However, there are several dynamics at work. Cas’ longtime friend is wholeheartedly opposed to this action and works strategically and violently to bring it to an end. Cas herself is fighting an internal battle as her mind begins to fall apart as a result of the damage she sustained from the telepaths earlier. At the same time (coincidentally or otherwise) a telepath is following her, insisting that he be allowed to enter her mind to save her from dying. And as the local crime leaders realize that something is wrong in “their” city, they begin strategizing ways to combat this collapse in evildoing and enlist Cas to help them.

Huang deftly raises numerous questions through the course of the book. If you could alter minds without people’s permission in a way that would help society, should you do so? Cas believes the end justifies the means. Her one friend is absolutely opposed. Her other friends’ opinions shift between pro and con as the story progresses. Another question, one that permeates all of her Cas Russell books, is: can evil deeds promote a good purpose? One character is committed to seeing God’s will fulfilled on the earth–even if he has to commit mass murder to achieve it. He does wear a certain moral clarity as a righteous armor, but not everyone agrees that his methods achieve his goals.

The danger of raising deep questions in fiction is that they can distract from the action and plot. This is not an issue with an author as creative as Huang. Her characters are gifted multitaskers. They are quite able to argue deep philosophical ideas even while chasing (or running from) the bad guys. Cas Russell may drink too much, her mental health may be approaching total collapse, her friends and her enemies may easily flow from one side to the other, but none of that keeps her from fighting and clawing and shooting and thinking her way through every challenge she faces.