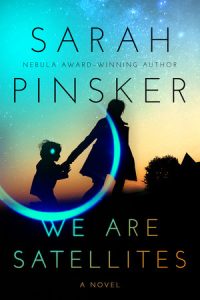 Sometimes the most frightening sci-fi books are those that feel like they could already be happening. I’m pretty sure that We Are Satellites could begin next Tuesday. Rather than suppose a dystopian future, Pinsker has examined our often dystopian present and followed the impact of a very realistic technology in the lives of a very realistic family. The result is both horrifying and hopeful, showing the potential for technology to both bring us together and to tear us apart.

Sometime in the near future, a device can be implanted in a person’s mind that enhances their ability to multitask. David, a high school student, fears being left behind when all of his wealthier classmates start getting hooked up. His mothers, Val and Julie, want what’s best for their children. Val is very worried about the dangers and implications of the technology. As a high school teacher she is starting to see the separation between those students who have the devices and those who do not–and the separation between the teachers themselves who have or do not have them. Julie works for a congressman and realizes that she is getting left behind by her connected colleagues. She, too, covets this new technology.

David and Julie get the devices implanted. David’s has an unintended side-effect, one which he calls “noise.” His brain notices everything and gives it all equal attention. Rather than being able to drown out the hum of an overhead light, the rattle of an air conditioner, the smell of a classmate’s gym socks, the mottling of sunlight through clouds, his mind races constantly from detail to detail, never relaxing and never prioritizing. This is very difficult to deal with, but also makes him a perfect recruit for the Army. He signs up while still in high school, joining upon graduation, and becoming a war hero credited with saving many of his comrades during battles.

Julie’s works just as intended and she is indeed able to keep up with her colleagues. However, since she does not experience the device in the same way her son does, she is not truly able to understand his frustration or help him cope with the challenges he faces.

Val finds herself being sidelined by a world increasingly connected. She loses her teaching job and is forced to take a job teaching children who cannot be connected because of some physical reason (epilepsy and autism disqualify candidates, among other things) or because of religious or other objections. This personal choice of hers helps her relate to their younger child, Sophie, whose epilepsy makes her ineligible.

What makes this story so appealing to me is not just the questions surrounding the technology. It is the family story that is revealed by the technology. Val and Julie love each other, fiercely and completely, despite their disagreement over the implant. Still, that disagreement hurts their ability to communicate and connect with each other, to the point where secrets and lies of omission threaten to destroy the family they’ve made together. Sophie becomes an activist warning about the dangers of the technology and the threats to society the implants bring. This puts her at odds with one of her mothers. It also puts her at odds with her brother, who after his honorable discharge has taken a position with the developer as a brand ambassador for the implants. Even as he promotes the implants, though, David continues to struggle with his own mind’s reaction to the implant. No one truly believes him, no one understands his struggle, and his physical challenge is constantly interpreted as a psychological impairment.

Sarah Pinsker has become an author I can’t resist. Her characters are deep and real. Her questions about society and culture are thoughtful and provocative. And the plot feels like it was ripped from tomorrow’s headlines. I’m excited to see what comes next from her.