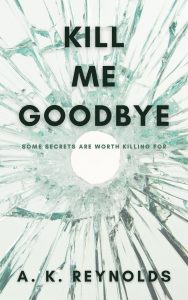 Josephine Finnegan worked as a barrister defending criminals. Essentially what we in America call a public defender, she usually took the cases of indigent and low-level criminals who could not afford to hire a more high-powered lawyer. So she should have known better than to park her car in a dark alley.

The young men who attack her that evening begin a chain of events that spirals quickly out of control. After being mugged, she finally returns home to find her sister dead on her couch. Murdered. Her wife, Sarina, has disappeared. And the police are determined to pin her sister’s death on Jo.

A.K. Reynolds is the pen name for a husband and wife writing team. I am not sure whether this sort of partnership enhances the adrenaline in the text. It is definitely a possibility. Jo’s troubles send her fleeing around Manchester, hiding from her pursuers, trying to figure out what they are looking for, why her sister is dead, and where her wife has gone. A brutal figure, Hench, leads the pursuit. A sadist who delights in torturing his captives, Hench will have no qualms about tearing her apart to find what he seeks–or just tearing her apart when he finds out she does not have whatever it is.

Kill Me Goodbye is a thriller in every sense of the word. There is a mystery to be solved, but the primary thrust of the book is Jo’s efforts to find her wife and to stay alive. Jo discovers she is capable of far more than she ever suspected. She also learns that the life she had formed was not what she thought it was. There are secrets in her family that are dark and deadly. As those secrets get revealed, Jo feels the ground falling away beneath her feet. If she survives, things will never return to normal. 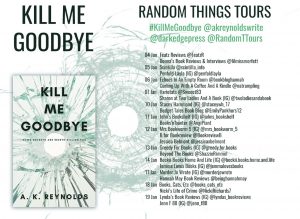 Our thanks to Anne Cater of Random Things Blog Tours for our copy of Kill Me Goodbye, provided in exchange for our honest review. The opinions here are solely those of Scintilla. For other perspectives on this novel check out the other bloggers on this tour.

One thought on “Blog Tour: Kill Me Goodbye, A.K. Reynolds”