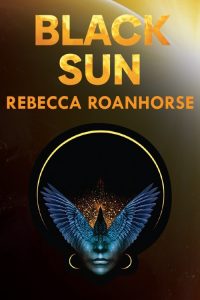 Black Sun is extraordinary! At the very beginning it grabs hold of the reader and refuses to let go until the shocking conclusion. Rebecca Roanhorse is a powerful writer with a flair for telling very creative stories, stories which in this case are inspired by the cultures of pre-Columbian civilizations of the Americas.

In the first chapter we meet the boy Serapio. He is in the process of being transformed into a god. His mother has accessed the magic, has prepared her son as well as she could, and the culmination of her efforts is drawing near. To complete the first phase of his transformation she must blind him, sewing his eyes permanently shut. The boy is not (too) afraid. As intense as this opening is, it builds from there.

Xiala is captain of a ship. She is a rare person in many ways: a “Teek” (a mysterious tribe of only women who live on a floating island in the sea), she is at least bisexual, and she is a captain in an environment dominated by men. Teek have access to certain magic which helps them on the ocean. They can read the waves and navigate flawlessly, they can use their songs to calm fears, and even to calm waves (though major storms are impervious to their gifts). Xiala wakes up in jail, not really remembering what she had done this time to end up there. Before she is even charged, a wealthy benefactor frees her and gives her a job: deliver a passenger to the city of Tova before the solstice. She will need all of her gifts and more than a little luck to succeed in time, but given the choice between jail – and possible execution – and striking out across the sea far away from her troubles the decision is rather easily made.

Naranpa is not dead, despite her enemies’ efforts. She is the high priest of the Sun God, living and ruling in Tova. Born in poverty in the city’s “Maw,” she has risen to her position through hard work from the time she was sent to live with the priests as a ten-year-old girl. One does not get to her position, though, without accumulating a few enemies. Those enemies are hoping to arrange for her death. Who those enemies are, though, is hard to discover.

And Okoa is the son of the Crow matron. Having trained in the war college for many years, he is forced to return home after his mother’s sudden death. He soon finds that the intrigue and machinations of his home city will thoroughly test the training he has completed. Not every battle is fought in the open.

Weaving back and forth between these characters, shifting in time to fill in backstory for the characters, we find them all coming together for the solstice in Tova. This solstice is unique, unprecedented, an event called “The Convergence.”  Few realize just how memorable it will be.

Roanhorse has written previous books that won awards. This one may be her best yet. It has already been purchased by a studio and plans for a major production are underway. Now with a second jaw-dropping series in progress, Roanhorse is taking her place among the leaders of modern fantasy and carving out a place of her own by taking inspiration from the rich cultures that inhabited the Americas before the arrival of Europeans.