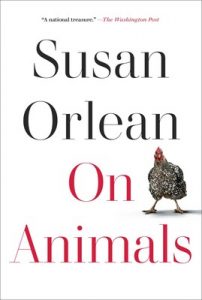 Susan Orlean tells the story in her book of a time when the man she was seeing told her he was inviting his best friend over to her apartment for Valentine’s Day and she should dress down. When the man arrived, he told her that her outfit was too nice and she had to change. Annoyed, she went to her room and changed. The new outfit was also unacceptably nice and she was sent back to change again. This was the first Valentine’s Day for them as a couple, and at this point it looked like it might be the last. When she came out the third time, he was standing there with his friend, with a total stranger, and with an adult African lion.

An adult African lion. In her apartment. In Manhattan.

She and her (now) husband have spent every Valentine’s Day together since then. No word on whether the lion joined them for any future dates.

Susan Orlean is such a gifted storyteller. Her skill with language and her natural empathy for her subjects lets her get into people’s hearts and tell their stories. This collection of previously published articles for The Atlantic, The New Yorker, and other magazines all relate to animals. They are not really about the animals, though. They are about the relationship those animals have with people. The bonds we forge with our pets and our domesticated creatures are varied and strange, and the effects cut both ways.

A farmer in Cuba holds to the old ways and plows his field using oxen. One of his pair died so he had to find a new one. This is not easy: it had to be comparable in size to his remaining ox, it had to be trained on the same side as the previous ox had used (oxen cannot be trained to pull from both the left and the right and they will not be retrained to the other side). The man persevered and did eventually find a compatible ox to continue his work. The story is really not about the oxen, though. It is about a man holding to traditional methods, methods which found new life in the gasoline shortages after the fall of the Soviet Union.

A young girl’s family is moving from their home near Boston to a larger place outside of the city. This means she has to give away her racing pigeons. Pigeons return home until they can’t. They cannot be relocated–they will just fly back to the old address. Many in the racing community refuse to move for that very reason. Where their pigeons are at home, they are at home.

Orlean herself is part of many of the stories, along with the menagerie that shared her Hudson Valley acreage. A desire to keep chickens led her to purchasing an “Egloo” coop. Efforts to save the life of one of those first chickens led her to learn about avian diseases–and to sob uncontrollably in the vet’s office when it finally had to be put to sleep. A woman comes to comfort her and asks, “Was it your dog?” “No,” she replies through her tears. “My chicken.” Chickens lead to ducks, then later guinea fowl and turkeys. Her cats joined the household to catch the mice in the basement. However, the cats do not like going into the basement. Why? She does not know, but speculates “Maybe because there are mice.”

Orlean uses words as an artist chooses paints. She layers texture and nuance beautifully. I found myself caring deeply for the people and the animals she introduces to her readers. I may never have a mule, or a chicken, or a pigeon. I am sure I will never have a lion in my house. Thanks to Susan Orlean, though, I will have delightful memories of those animals and people that bring a smile to my face.